Kindergarten Testing: The Realities and Dangers 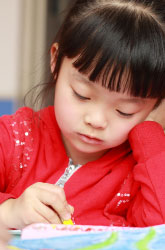 Standardized testing in kindergarten. Perhaps unimaginable, but it is happening in some states. And for many educators and parents, this reality is cause for great concern.

“There is clear evidence that these types of tests are not appropriate for young children,” says Samuel Meisels, expert in childhood assessment and president of the Erikson Institute, a graduate school for child development, in Chicago. “In the first eight years of life, there’s a great deal of variability in how kids learn, and standardized tests tend to see children in a very homogeneous way,” Meisels says.

According to a recent report released by Alliance for Childhood, an advocacy group based in Maryland, research shows that standardized tests do not accurately measure young children’s knowledge and are not reliable indicators of future school success. Joan Almon, executive director of Alliance for Childhood, explains that young children simply do not have the skills to overcome their physical and emotional needs on any particular day. “Children are very subject to how they feel,” Almon says. “If they’re hungry, for instance, or sleepy or grumpy, their test scores will be affected.”

Meisels explains that this focus on standardized testing is a result of the structure of accountability set in motion by No Child Left Behind (NCLB), the largest high-stakes testing endeavor ever implemented on a national level. Though standardized testing through NCLB does not begin until grade 3, some states have employed the testing in earlier grades.

The belief of some superintendents and principals is that by beginning the testing earlier, children will be better prepared for the tests when they reach third grade. “But this isn’t based on any long-term research,” Almon says. “I’d be surprised to see that standardized tests in kindergarten would yield higher test results in grade 3.”

But, despite the concerns, test preparation is happening in kindergartens across the U.S. According to a report released by the Alliance for Childhood, teachers are spending an average of 20 to 30 minutes each day on activities associated with testing.

Meisels says Florida and Texas are two examples of states using standardized testing when students enter kindergarten in an attempt to measure the success of the prekindergarten programs. This approach, Meisels says, has a number of significant flaws.

The first flaw Meisels points to is that tests given in the fall of kindergarten serve solely as posttests, so there is no measurement built in for progress. “We don’t know where the kids started from,” Meisels says. “We don’t know whether they made a lot of progress or very little progress.”

Another problem with the approach is the lack of controls for learning loss over the summer months. “There’s a phenomenon of summer loss in education,” Meisels explains. “We know that children have extremely different summer experiences, and some kids come back in the fall and have lost a lot of achievement.”

Testing methods are another concern. Meisels explains that the tests are simplistic achievement tests of basic literacy and simple math, yet they aren’t truly representative of literacy or math skills. “They are just a few things that kids need to know,” Meisels says, “but it may be that some children have great strengths in other areas that aren’t tested at all.”

Another flaw to the approach is the effect tests can have on teachers and how this trickles down to students. According to Meisels, there is substantial evidence that teachers’ perceptions of young children can be influenced by test scores. If these test scores are not accurate depictions of what children can do, this can result in teachers having inappropriate negative impressions of the children, Meisels says. As might be expected, research also indicates that young children do not have the experience or built-in self-esteem to be able to withstand these negative perceptions over a period of time.

The Alliance report summarizes the position of the Association for Childhood Education International (ACEI), stating that “standardized testing in the early years causes stress, does not provide useful information, leads to harmful tracking and labeling of children, causes teaching to the test, and fails to set conditions for cooperative learning and problem-solving.”

So if not standardized tests, then what--how should teachers evaluate students’ progress? According to the Alliance report, research has shown the best way to “test” children in the early grades is through performance assessments or observational assessments. With these assessments, teachers observe, record, and then evaluate students by comparing their observations to explicit, well-developed standards of performance across the entire curriculum. The key is that children are unaware they are being tested.

With the pervasive use of standardized testing and the overall emphasis on performance and knowledge gain in kindergarten, parents should keep in mind that they can be proactive about their children’s education. If an assessment or test of any kind indicates that a child needs help, parents should feel comfortable talking with the teacher about the accuracy and validity of the test. “Believe in your child. That’s first,” Meisels says. “Before I got too excited, I would try to get the teachers to explain more fully, to get more evaluation if necessary, and I would want to get another opinion.”

Meisels emphasizes that it’s more important to believe in our children than to believe in the tests. At the same time, he says, we should remember that the goal of both the parent and the teacher is to help the child. “I always try to counsel parents to work in a partnership with teachers,” Meisels says. “We’re all trying to help the child to have success in school.”

Next Article: How to Ace Exams... Without the Family Fight
We enable strictly necessary cookies to give you the best possible experience on Education.com.Cookie policy