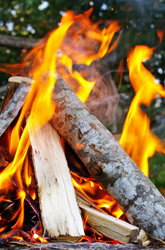 It’s Summer Solstice! This earthly event, taking place each year on the 21st of June, is when the northern half of the Earth is tilted towards the sun—making it the longest day of the year for folks in the Northern Hemisphere.

The Summer Solstice provides a great learning opportunity for kids of all ages. Here are some fun facts about this special time of year:

Science
The equator is an imaginary line that divides the Earth in half between the Northern Hemisphere and the Southern Hemisphere. The Earth is divided by another imaginary line, called the axis, which goes right through the North and South Poles. The Earth rotates on its axis once every 24 hours, which is why we have day and night. The axis is tipped a little as it moves around the sun, which gives us the seasons. It gets hot in the summer in the Northern Hemisphere because that’s when the top half of the earth is tipped towards the sun—and it’s tipped the most on the day of the Summer Solstice. But, if you were in the Southern Hemisphere on Summer Solstice, you’d be bundled up for winter! The Arctic Circle is another imaginary line (also known as a circle of latitude). Though most of the Arctic Circle is ice-covered ocean, it passes through several countries, including Norway, Finland, Sweden, Russia, Alaska, Canada, Greenland and Iceland. On the Arctic Circle, the sun stays out for 24 hours! But in the Antarctic Circle, another circle of latitude containing Antarctica, it is dark for 24 hours on this day.

Culture
The word “Solstice” is really two Latin words smooshed together: sol meaning sun, and sistere meaning to stand still. This
is because, as the days lengthen around the 21st of June, the sun seems to stand still in the sky. Struck by the amazing power of the sun, many cultures hosted large feasts and celebrations during Summer Solstice. For Christians, it’s the Feast of St. John the Baptist. For Wiccans it’s Litha. For Pagans it’s Midsummer. For Chinese, it’s a celebration honoring Li, the Goddess of Light.

You can host your own Summer Solstice Party by taking a little bit of tradition from a smorgasbord of cultures both ancient and current. Here are some ideas:

Build a Bonfire
Many Summer Solstice traditions center on the life-giving force of fire and light. The Celts lit a bonfire and danced to help increase the sun’s energy. If you have a backyard, or access to a campground where you can host a small bonfire, then you’re well on your way to bringing back Solstice traditions. First, contact your local Fire Department to check regulations for bonfires in your area.

To make a bonfire:

Step 1
Start by making a circle of rocks around the area where you want your bonfire. In the middle, place two logs parallel to each other about 6 inches apart.

Step 2
Collect a bundle of small dry twigs and, keeping the bundle tight, place it between the logs, with one side leaning up against the side of a log. Next, place several pieces of kindling on either side of the bundle, leaving a space for you to light the bottom of the bundle.

Step 3
Place two more logs down, perpendicular to the first logs and add more kindling as filler. Lay kindling up vertically against this base. Then some longer logs to make a tripod. Lean more logs against the base in this way, making sure to leave a door to light the fire.

Ward Off Evil Spirits
In the Pagan tradition, the Summer Solstice, or Midsummer, was a time of magic, and people wore protective garlands of herbs and flowers to ward off any bad magic that might be lurking around. St. John’s Wort was held in particularly high esteem for its ability to neutralize the powers of evil. But, it’s also a great time to show off summer’s bounty of flowers! Garlands can be made using a large needle and thread, or with string and a glue gun.

Dance around the Maypole
In ancient Sweden, a Midsummer tree was set up and decorated in each town. The villagers danced around it. In the United Kingdom, these were called Maypoles. You can make your own maypole by attaching garlands, flags, flowers - even toilet paper - to a tree in your backyard or nearby park. Wrap several strips of ribbon around the tree and attach them to the bottom of the trunk, then have your child and his friends dance around the pole while unraveling the ribbon.

Eat!
A return of the summer months means fresh vegetables and fruits, so the idea is to celebrate with food that is in-season in your area. An array of sliced fruit, salads, or grilled veggies makes great solstice fare. The Swedish, after several months in darkness, celebrate their Midsommars Afton  with cheese, bread, pickled herring (okay, you can skip that), smoked salmon, cold cuts and Swedish meatballs!

In Pagan tradition, the first full moon in June is called the Honey Moon, because it is believed to be the best time to harvest honey from hives. This is why mead, an alcoholic beverage made by fermenting honey with yeast, was so popular at this time of year. Mead was eventually replaced by wine, but it’s still a yummy treat. Here’s an easy nonalcoholic version for your Summer Solstice party:

What You Do
Bring the apple juice, honey and water to a boil, and then let it simmer for about 30 minutes. Add cloves, cinnamon or orange slices to taste. When cool enough to handle, strain the mixture. Refrigerate before serving.

Next Article: Making Math a Part of the Summer Months
We enable strictly necessary cookies to give you the best possible experience on Education.com.Cookie policy