Log in with different email
For more assistance contact customer service
School and Academics
Education Issues Today
Are Traditional Grades a Thing of the Past?

Are Traditional Grades a Thing of the Past? 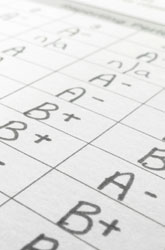 In classrooms around America, hands go up every day with the question, “Is this for a grade?” But perhaps a more pressing question would be "what is a grade for?" Today, the grades on a child's report card reflect not only a grasp of academic subjects, but also a variety of other factors such as attendance and behavior. Do traditional grading systems tell us what we really want to know about a child's learning?

A lot, according to many experts. Under traditional grading, extra credit, late work, class participation and non-academic assignments (returning a signed progress report, for example) can influence a student’s score. These factors represent life skills which, while important, don’t necessarily reflect a student’s content knowledge.

Ellis Middle School teachers Eric Harder and Curtis Bartlett saw issues with this firsthand at their Austin, Minnesota school, where a hard-working student with good life skills might earn a passing grade and yet fail a standardized test, but a student with sub-standard life skills and relatively poor grades might ace that same test. And if a substantial portion of a student’s grade consists of these non-academic factors, then grade inflation (the awarding of higher overall scores for lower quality work) can become an issue. Bartlett and Harder came to see traditional scoring as potentially misrepresenting a child’s success in class.

The two 8th grade math teachers decided to study the problem of grading as part of a grant partnership with the Hormel Foundation, the University of Minnesota and Austin Public Schools. Their studies introduced them to Ken O’Connor’s book A Repair Kit for Grading: 15 Fixes for Broken Grades. O’Connor, an expert on assessment and evaluation, says that traditional grading—which takes into account many non-academic factors such as behavior and participation—isn’t necessarily a true representation of what kids really know.

Through O’Connor’s work, Harder and Bartlett saw a solution to this disparity: increase evaluation accuracy by splitting students’ grades into more accurate component parts. What began as an experiment by two curious teachers four years ago has since branched out into a new assessment philosophy called Grading for Learning. Grading for Learning separates the two elements of traditional grading by assigning each student a content knowledge grade and a behavioral life skills grade. “We believe that it is impossible to give a student one letter grade to help parents, teachers, colleges, and even the students themselves to get a hold of what they have learned,” says Harder, a veteran math teacher.

Knowledge grades are letter grades based on both content knowledge and local, state and national standards. These grades are “based on students’ performance on preset standards,” according to a Grading for Learning overview, “not on students’ achievement compared to other students.” Grading for Learning introduced some big changes in knowledge-based assessment at Ellis:

The shift from homework to so-called practice work at Ellis is both semantic and philosophical. “The word ‘practice,’ we found, has cleared some of [the homework debate] up by having a word that means what we are doing. We are asking the students to practice using the information we have been giving them,” says Bartlett, a 3rd year math teacher.

The other half of Grading for Learning is the life skills grade, which involves four facets of important student characteristics:

These characteristics are scored on a 4 point rubric in which 4 is “excellent,” indicating that a skill is consistently practiced, and 1 is “unacceptable,” indicating a skill that is rarely demonstrated by the student. Under conventional grading systems, academic dishonesty or late work might have cost students points; now such issues are seen as behavioral, not academic, and are reflected in the life skills grade.

Reactions to Grading for Learning

Harder calls Grading for Learning “more of a philosophy,” and one that meant changes both in and out of the classroom. The program was a bit of a hard sell at first, and student scores dropped without the padding of non-academic points. But ultimately, Grading for Learning does seem to be making a difference. Data from the 2007/2008 to 2008/2009 school years showed a “significant” positive increase in the correlation between students’ grades and their performance on state standardized tests. And Ellis parents eventually came around: parent/teacher communication resulted in parents having a better understanding of where their child’s knowledge was in a subject. Frequent collaboration involving parents, students, teachers, administrators and guidance counselors guarantees that modifications are constantly being made to the program. “We realized that we were really changing a local culture of education,” Harder says. Grading for Learning has been expanded to cover approximately 900 Ellis Middle School 6th-8th graders, and plans are in the works to adapt the program for elementary and secondary students.

Harder is aware that this sort of change takes time. “We realize it will be many years . . . before this is a part of standard practice,” he says. But Harder and his colleagues see this as just the beginning of a larger shift in education:  “School is learning, not the amassing of points.”

Next Article: Benefits of Failure: Why Making Mistakes in School Is a Must
We enable strictly necessary cookies to give you the best possible experience on Education.com.Cookie policy