10 Ways to Deal with a Teen who Talks Back 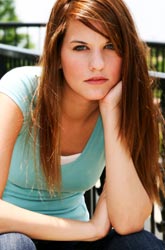 Parents often notice a resurgence of the “terrible twos” when their child enters adolescence, complete with the assertions of independence, the frustration of not having the language needed to express the complexity of their emotions, and the seemingly automatic response of, “No!” or “That’s not fair!” when asked to do anything by parents. Even tantrums seem to rear their ugly heads during the teen years.

It seems as if our current society both reflects and encourages these behaviors, as media often shows sassy teenage stars who get a laugh from their rude remarks aimed at adults, who are often portrayed as unreasonable and/or less intelligent than the teenagers. Parents who are concerned about quashing their teen’s independence, worried about engaging in a power struggle that they might not be able to win, or just feeling helpless in the face of the teen’s strongly expressed emotions, may simply give up when their child refuses to do what is asked of him.

It's important for parents to understand that teenagers do not have the same control of their impulses that adults do, since the part of the brain that helps one think ahead and adjust behavior based on potential consequences (the prefrontal cortex), is still developing. However, even though your teenager’s brain development is still in progress, she still needs to learn how to control impulsive and rude behavior, not only to make life more pleasant for those surrounding her at the time, but also because the experiences that one has during adolescence helps to wire the brain to effectively deal with emotions and impulses throughout life. Parents need to provide support and guidance that will enable such effective responses to eventually become hard-wired in the brain. Part of providing such support and guidance is setting clear boundaries about what kind of behavior will be tolerated, and what consequences exist for engaging in behavior that is not allowed.

Both teenagers and parents need to know that it is developmentally appropriate and healthy to question what is being asked of them, as long as they are not doing it in a rude or offensive manner. We do want to teach our teenager that it's important to stand up for what they believe in, and that some ways of getting what they want are more effective than others, but that sometimes standing up for oneself may include an unpleasant consequence. Here are some ways to deal with teenagers that talk back and show disrespect:

If your child seems to be out of control or defying you in ways that endanger her safety or that of others, seek professional assistance immediately. Ultimately, helping your child break habits of backtalk and disrespect will help her not only in her not only at home, but will make all the difference in her ability relate to others and be successful in life.

Next Article: The 6 Most Important Decisions Your Teen Will Ever Make
We enable strictly necessary cookies to give you the best possible experience on Education.com.Cookie policy