Log in with different email
For more assistance contact customer service
School and Academics
Helping Your Child with Vocabulary
What's the 2007 Word of the Year? 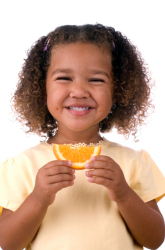 A great way to kick off 2008 is by boosting your child's vocabulary, and you can start by reflecting on the New Oxford American Dictionary's 2007 Word of the Year: Locavore.

If you've gorged on some local strawberries you picked with your family, or frequented that Saturday farmer's market downtown—you're acting like a locavore. A locavore is a person who endeavors to eat only locally produced foods. But don't rush to the dictionary to see for yourself, because it's not there, at least not yet.

Ben Zimmer, editor for American dictionaries at Oxford University Press, says the word is under consideration for entry into the dictionary. “We're monitoring the word to see if it continues to develop mainstream usage,” he says.

Getting into the dictionary isn't as easy as you think--even for the word of the year. All new words have a trial period like this while the kinks are worked out. The word locavore is like a unwieldy toddler at the moment. It was coined two years ago by Jessica Prentice, a chef from San Francisco who, along with three other women, set forth a challenge to Bay Area eaters to  only consume food grown within a 100-mile radius for a month. That idea spread to other areas across the country, but it also mutated. As Zimmer points out, the definition of “local” is shifting. Sometimes it's a 150-mile radius, in other cases it's produce grown in-state, depending on the season and the geographic area. Some participants prefer to call themselves locatarians or localvores. “Seeing as they're arguing on how to spell it, it's not quite settled yet,” Zimmer says.

Still, it's just that sort of debate that made locavore appealing. The guys at Oxford were looking for a word on the cusp. “We wanted the 2007 word of the year to say something about the way we're living our lives,” Zimmer says.

Certainly the idea behind the word isn't a new one. Up until recent history, humans were strict locavores. Now our food travels an average of 1,500 miles before we hunt and gather it into our shopping carts with warrior-like instinct. Getting food from local farms is appealing to people for environmental reasons; there are less fossil fuels used in transportation and it supports smaller family farms. Locavores also say the food tastes better, and is more nutritious. And, that's what makes locavore a weighty word, says Zimmer, because it addresses “a concern that's close to everyone: eating.”

It also reflects a wider linguistic trend, Zimmer says. A lot of the new vocabulary entering the language reflects our burgeoning environmental awareness. “It's a greening of the language,” he says.

So does locavore have the staying power it needs to be awarded the ultimate prize for any word: an honored place in the pages of a dictionary?

Zimmer says it's dangerous to make predictions. There are words that were entered in the dictionary prematurely and were removed later. Remember “information superhighway?” And, certainly we wouldn't wish the same fate on the young and unassuming “locavore.” But, despite the difficulty in pinning Zimmer down on the issue, he would be quoted as saying this: “we do think it has promise.” You go, little word.

Runners-up for the 2007 Word of the Year include:

Bacn: Email notifications, such as news alerts and social networking updates, that are considered more desirable than unwanted “spam.”

Colony collapse disorder: A still-unexplained phenomenon resulting in the widespread disappearance of honeybees from beehives, first observed in late 2006.

Upcycling: The transformation of waste materials into something more useful or valuable.

So, give your kids a vocabulary challenge: how many of these words do they know, and which ones do they think merit a place in the dictionary? Justifying their answers may prove an excellent introduction to linguistics and a great social studies lesson.

Next Article: Start a New Family Tradition in the New Year
We enable strictly necessary cookies to give you the best possible experience on Education.com.Cookie policy