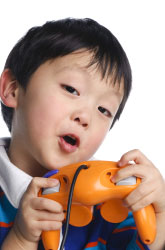 What wouldn't you do for your kid? You hold his hand crossing the street, keep him from sticking his finger in light sockets and try to get him to eat a vegetable or two. But do you know how to police his video game choices? Do you know what's out there? What are the worst video games to buy for children?

There is some controversy over whether video games cause negative or violent behavior. A 2010 study in the medical journal Pediatrics shows a pinch of both good and bad effects among adolescent gamers. On the bright side, gamer boys (76 percent of the study population) showed no negative behaviors and less inclination to start smoking. Girls didn't fare as well; though less likely to report depression, gamer girls were more prone to fighting or carrying a weapon to school.

Fortunately, games are subjected to a rating scale to give you an idea of what's appropriate for your kid and what's not. The Entertainment Software Rating Board, ESRB, seeks to give consumers impartial information about video games and mobile apps. Here's the rundown:

Essentially, kids shouldn't be playing video games intended for older audiences. But how do you know what games are the worst to buy? If you aren't video game-savvy and think the Halo game series is about angels, it's a good idea to brush up on some of the latest games available. Obviously, you should avoid M and AO games. In addition, many game names are dead giveaways, like Assassin's Creed and Mortal Kombat. To help, here is a list of some of the worst video games rated Teen that you should NOT buy for your young gamer:

These games are just a sampling of what's out there, and you should use your best judgment. And even if your child is exposed to the "worst" game, it's not the end of the world. According to Brandon Yorty, M.S., a board certified behavior analyst, behavior must be reinforced for it to become a habit. For instance, if your daughter watches a video game and then acts out a scene from it to her friends, their response is more likely to shape her future behavior choices than the video game itself. If the friends clap or positively respond, she may be inclined to repeat it, and with more gusto.

So, why not start your own positive reinforcement of game behavior that you approve? Though you can't be with him all the time, you can make sure your child plays only appropriate games at home. You are his best role model, so you show him what's right.