Log in with different email
For more assistance contact customer service
Parenting and Families
Positive Discipline
Is Yelling at Kids as Harmful as Spanking? Experts Weigh In

Is Yelling at Kids as Harmful as Spanking? Experts Weigh In 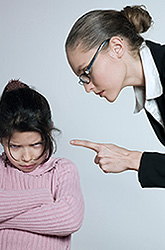 In the grand scheme of parenting, spanking has gone the way of the dinosaur. While a quick swat on the behind was once common, parenting experts and mental health professionals alike have long expounded on the perils of corporal punishment as a parenting method.

Not spanking your child is a step in the right direction—but if you default to yelling instead, you might be doing more harm than you think.

Is Yelling at Kids Normal?

Statistically speaking, raising your voice is a normal parenting behavior. When polled in a 2003 University of New Hampshire study, 75 percent of parents copped to yelling at their children at least 25 times per year. Whether it's to gain control of a situation, to vent aggressive feelings, or just to feel heard, raising your voice can make you feel better.

But that doesn’t mean yelling isn’t causing harm, according to a study about yelling in a 2013 issue of Child Development. The findings were astounding: Harsh verbal discipline—including cursing, yelling, and insults—led to an uptick in adolescent depression and adversely affected adolescent conduct. So while you might feel like a little yelling is harmless, you could be doing more damage than you think.

While it may not physically hurt your kid like spanking, raising your voice too often can put impressionable kids in a world of hurt. Here are some steps to ditch your yelling in favor of more effective, less damaging discipline the next time your child behaves badly.

Hey, even peaceful parents can lose it occasionally. The trick to disciplining your children isn't about spanking and yelling, but by making sure they really listen. By retooling the way you deliver your message, you can ensure that you're heard loud and clear without ever having to raise your voice.

Next Article: Teaching Kids to Make Wise Choices
We enable strictly necessary cookies to give you the best possible experience on Education.com.Cookie policy