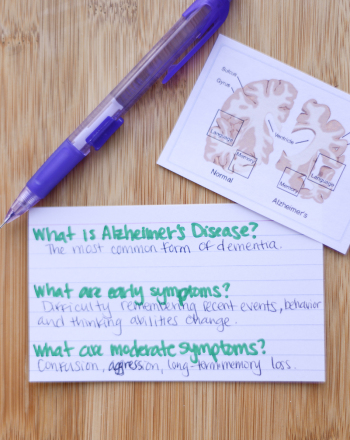 On the information level, you will learn about a disease in which the brain no longer functions at full capacity, where memory begins to fail, where dementia becomes apparent. This specific disease which strikes as many as 5.1 million elderly American people is a major area of current research. This is an abnormal sickness, Alzheimer`s disease and is named after Dr. Alois Alzheimer who first observed the symptoms in one of his patients namely, the loss of memory, language problems, and unpredictable behavior. After his patient died, he examined her brain and found plaques and tangled neurons. He also discovered a loss of connections between nerve cells in the brain. This was only the beginning.

In this project, you are to take on the role of a movie producer who has been asked by the local television company to create a script for a short movie on Alzheimer`s Disease. The purpose is to educate the public in your community on the key aspects of the disease, what it is, what is presently being done in the field of brain research to alleviate the symptoms and to delay the disease. In addition you are asked to provide advice to people who have loved ones with the disease to assist them in helping both the victims and themselves in coping with the disease. You will be researching Alzheimer`s disease and using all of information and visuals such as movies on the internet, as well as accounts by people of how they coped with their parents battle with the disease. You will also provide the public with information as to how they could help as volunteers and as contributors to this cause.

Although this is a science fair project, who knows, when you complete the script you may wish to send it to the local TV channel, we might both be presently surprised!