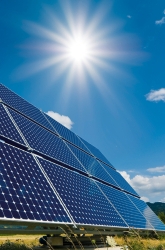 The goal of these experiments is to learn about how the angle of incidence affects the efficiency of solar cells.

Solar cells convert sunlight into electrical energy. Different types of solar cells have varying degrees of efficiency and cost. The term “angle of incidence” refers to the angle of a ray to a surface is measured by the angle between the ray and the normal vector of the surface (generally, a line vertical to the earth). Since solar cells are expensive, their efficiency can be bolstered by mounting them to devices that move them so that they are always at the optimal angle of incidence with respect to energy output. In this experiment, students will determine the optimal angle for energy output.

If you don’t already have a voltmeter and ammeter at home, they’re available on Amazon or at your local electronics supply stores (as are the solar cells and resistors).

Resistors are often sold in packs of five. If you are using a child’s wooden blocks, you want to use a saw in a woodshop so that the angle of the cut can be precisely measured.