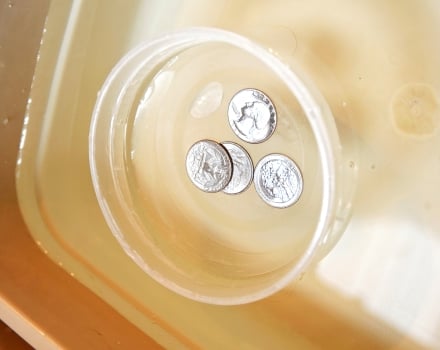 Why does a rock sink in water while a gigantic steel aircraft carrier floats? The aircraft carrier is much heavier, but glides along the ocean surface with ease. Clearly, weight isn’t the entire story. So what’s going on? What determines whether something floats or not? In this experiment, you’ll figure out how water and gravity work together to either keep your ship afloat or drag it down to the bottom of the sea.

How much weight can you add to a boat before it sinks?

If everything went well, you probably noticed that the mass of water in a full cup is very close to the mass of quarters needed to sink the boat. That’s not a coincidence!

A boat floating in water feels two opposing forces: gravity pulling down and something called a buoyant force pushing up. The buoyant force comes from differences in water pressure exerting a force on the boat. The boat floats when the buoyant force is equal and opposite to the boat’s weight.

When you filled your boat with water, you figured out the mass of the maximum amount of water it could displace. That tells you how heavy the boat can be before it sinks. Then, you emptied the boat and started adding quarters. Once the weight of all those quarters became greater than the weight of the displaced water, the boat sank.

Rocks sink because they weigh more than an equal volume of water. Aircraft carriers float because, even though they are incredibly massive, they actually weigh less than the amount of water they displace. Aircraft carriers are like your plastic boat before you added too many quarters. The reason they weigh less comes down to one thing: they are less dense than water. Ships float because they take the weight of all that steel and spread it out over a very large volume. An aircraft carrier is actually mostly filled with air!

If you took the ship and crushed it into a ball, however, it wouldn’t float anymore. You can check this by taking an empty soda can and floating it in water. Then, crush the can and put it back in the water. Even though it weighs exactly the same as before, it sinks! That’s because, by crushing it, you increased the density and the buoyant force could no longer hold it up.