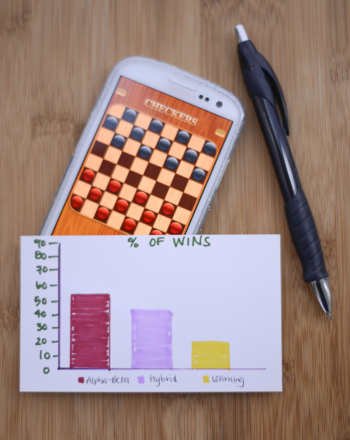 The purpose of this project was to determine the best algorithm for strategy games.

There are no costs associated with this project.

There are no safety hazards associated with this project.

The total time taken to complete this project is as follows:

The purpose of this project was to determine the best algorithm for strategy games.

The Alpha-beta algorithm has a long history of success. The first use of the algorithm in a game was in the 70’s and 80’s by the “Belle” computer. Belle remained the champion of computer chess until being superseded by the Cray supercomputer (Friedel, n.d.). Belle was the first computer to be successful using the early forms of the Alpha-beta algorithm. Deep Blue later used the algorithm in order to defeat chess grandmaster Garry Kasparov; this was a major development for the artificial intelligence community as it was the first time in history a computer had beaten a chess grandmaster in a standard match. Over time, the algorithm has been revised, updated, and modified to the point where several versions of the algorithm exist that all use the same core principles.

The Alpha-beta algorithm uses brute-force calculations (thousands every second) to make decisions. The Alpha-beta algorithm uses the minimax principle (one player tries to maximize their score while the other tries to minimize it) and efficient evaluation techniques in order to achieve its logic. Alpha-beta is a “game tree searcher,” or in other words, it forms a hierarchy of possible moves down to a defined level (i.e. six moves). In some variations, eliminating symmetries and rotations is used to reduce the size of the game tree (Lin, 2003). After the tree is formed the algorithm then proceeds to evaluate each position in the tree based on a set of rules intended to make the computer play stronger, this is called heuristics. The reason why Alpha-beta is fast, yet strong is that it ignores portions of the game board (Lin, 2003). It decides which portions to ignore based on finding the best move per level (or move) and ignoring all the moves that aren’t the best and the moves under them. Alpha-beta can calculate two levels of moves with 900 positions in 0.018 seconds, three levels of moves with 27,000 positions in 0.54 seconds, four levels of moves with 810,000 positions in 16.2 seconds, and so on. These efficiency-improving techniques are responsible for the small calculation times and improved game strategy that the algorithm provides.

Learning style algorithms are another popular type of algorithm for game use. Learning style algorithms aren’t necessarily a recent creation. They have been in use for approximately thirty years, but have been met with limited success until recently. In this approach, an algorithm uses its own experiences, or a large database of pre-played games to determine the best moves. Unfortunately, learning algorithms have also incorporated the “bad” strategies utilized by novice players. Over time, improvements have been made so that an algorithm can be a threat to intermediate players in most action games; however, learning algorithms are often unsuccessful in games requiring strategic play. The Chinook program uses the most notable learning algorithm. The program spent eighteen years calculating every possible move for the game of checkers. But the Chinook’s algorithm is considered by some not to be a “true” learning algorithm since it already knows all of the possible outcomes for every move (Chang, 2007). Chinook, however, does adjust its playing style for each player’s strategy; this is where its element of learning comes into play (Chang, 2007). Learning algorithms are considered closer to true intelligence than other algorithms that use brute-force calculations such as Alpha-beta. Compared to pure calculation algorithms, they play games more like humans and even show very limited aspects of creativity and self-formed strategy.

A hybrid algorithm combines the brute-force style of the Alpha-beta algorithm with the flexibility of the learning style algorithm. This method insures that the full ability of the computer is used while it is free to adapt to each player’s individual game style. Chinook successfully utilized this technique to make a program that is literally unbeatable. Because of the Chinook program, the game of checkers has been “solved.” No matter how well an opponent plays, the best they can do is end in a draw (Chang 2007).

Other champion programs have used just one style of algorithm in order to win. As a result, no particular algorithm has been measured or proven to be dominant. Game developers choose which algorithm to use based largely on personal preferences and on a lack of consensus from the artificial intelligence community as to which algorithm is superior. There are weaknesses that can be used to determine which algorithm will prove to be inferior. For example, the Alpha-beta algorithm does not generate all possible moves from the current condition of the game. Alpha-beta assumes that the opponent will make the best possible move available. If a player makes a move that is not in their best interest, the algorithm will not know how to respond because that move’s game tree has not been calculated. The opponent can trick the algorithm by making sup-par moves, and forcing it to recalculate. It is also important to note that the Alpha-beta algorithm can use tremendous amounts of time when calculating more than a couple of moves. The learning algorithm has its flaws, too. If it encounters an unknown strategy, the algorithm will be helpless against its opponent’s moves. The most likely way to minimize these flaws is to combine these algorithms into a hybrid. If the hybrid encounters an unknown strategy, it can then use the Alpha-beta style game tree to determine the possible moves from that point. Likewise, if the opponent uses a move not calculated by the brute-force method, it can then use learned strategies to defend itself. The hybrid algorithm will be faster and have better winning strategies than either the Alpha-beta, or the learning style algorithms.

The experiment clearly demonstrated the alpha-beta algorithm won more games, took less time to generate a move, and took less moves to win. It was clearly superior to both the hybrid and learning algorithms. 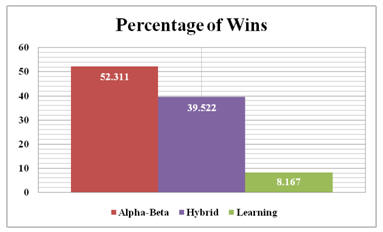 This chart shows the percent each algorithm won out of 9,000 games of checkers. Alpha-beta scored the highest percentage of wins, the hybrid came in second, and the learning algorithm scored the lowest percentage. 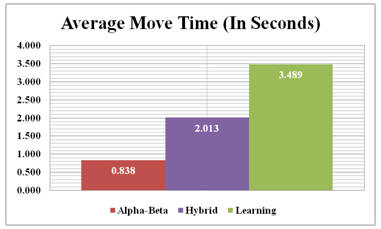 This chart displays the average time it took each algorithm to generate a move. In this situation the lowest scoring algorithm preformed the best. 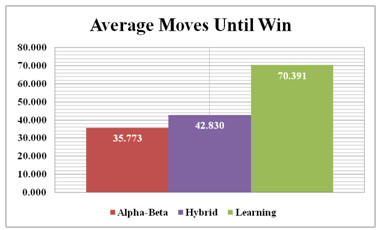 This chart represents the average number of moves it took each algorithm to win a game. As with the previous chart, the lowest scoring algorithm performed the best.

Evidence gathered from the experiments showed that the Alpha-beta algorithm was far superior to both the hybrid and learning algorithms. This can be concluded based on three distinct factors: the percentage of wins, the average time taken to make a move, and the average number of moves generated in order to win a game. In each of these categories the Alpha-beta algorithm preformed the best in every category. The hybrid performed better than the learning, but worse than the Alpha-beta. The Learning algorithm performed the worst.

This experiment included 9,000 trials; therefore, the experimental error was minimal. The only measured value that needed to be considered for errors was the average amount of time each algorithm used to generate a move. The computer can record the precise time, but the time was rounded so the time-keeping process would not affect the outcome of an experiment. However, the difference between the averages was not at all significant, and even if the computer recorded the results with absolute precision the conclusion would remain unchanged. Another aspect to consider about the results was the possibility of a recursion loop (basically, when the algorithm gets stuck in a repeating loop). Although the algorithm will break from the loop, it would cause the average time spent on a move to go up considerably for that game. The last error that needed to be considered was the inefficiencies in an algorithm’s programming. If an algorithm was erroneously programmed in a way that was inefficient, it would obviously damage the overall performance.

For a demo of the program email connerruhl at me.com