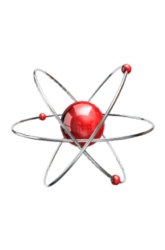 Atomic number is the number of protons in an element. This number is always the same for every atom of a particular element; it is a fundamental property of the element.

An isotope is a particular form of an element. While all isotopes have the same number of protons, the number of neutrons can vary. For example, hydrogen has three isotopes: protium (with 0 neutrons), deuterium (with 1 neutron) and tritium (with 3 neutrons).

Relative atomic mass is a synonym for atomic weight. It represents the average of the mass of all isotopes weighted by the abundance of each isotope.

This “paper-and-pen” experiment does not require setting up any special apparatus. All that is needed is a periodic table.

A, B, C stand for different relative abundances of isotope numbers a, b and c.

Silver has two isotopes, silver 107 and silver 109. The relative abundance of these is 51.84 % and 48.16 % respectively.
Calculate the relative atomic mass of silver.