Bicycle Water Bombs: Hitting a Target from a Moving Object 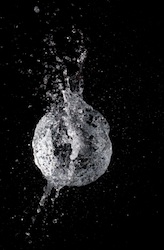 Using Newton’s first and second laws of motion, you will investigate the problem of hitting a target from a moving object.

References: Science Projects About the Physics of Toys and Games, by Robert Gardner (Enslow Publishers, Inc., 2000).