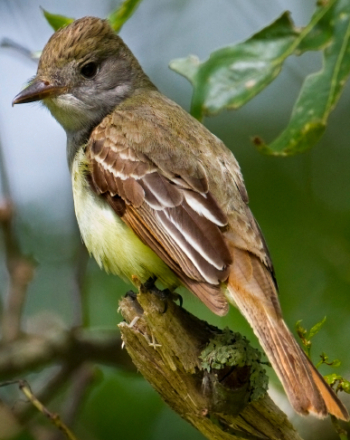 You may not think you're very big or tall, but to a bird, you're a giant! What would you do if a huge, mysterious creature towered over you? Well, birds usually fly away. Their wings allow them to get to safety when they believe their safety might be threatened. In this experiment, you'll explore a bird's personal space and discover what tells a bird it's time to fly.

How close can you get to a group of birds before they start to fly away?

While the distances will vary, you should have noticed several trends. Larger birds tend to fly away much sooner than smaller birds. In addition, you should have observed that with birds or groups of birds your approached repeatedly the flight initiation distance got smaller and smaller each time. In general, though, you probably were not able to get much closer than five feet.

Birds in the wild often don't let people very close because they don't trust us. Would you trust someone who was over ten times your size and looked nothing like you? However, since birds have wings that let them escape almost any situation, they'll sometimes let you get close -- maybe out of curiosity or the hope that you'll give them some food. Big birds tend to fly away sooner because of their size. It takes big birds longer to fly away so they need more time to "escape" any potentially dangerous situations.

The other big factor that affected the flight initiation distances you recorded was you. Depending on your stealthiness, or your ability to move very, very quietly, some birds may have taken longer to notice you -- and an unnoticed bird watcher equals a smaller flight initiation distance. Can you think of other factors that could have affected your stealthiness? If you were in a noisy park with other children or if a soccer game was happening nearby, these noises could have alerted and frightened the birds as well.

Do you think it would make a difference if you compared the "personal space" of animals in the wild versus animals people keep as pets? After all, people usually seem to be able to get pretty close to puppies and kittens. What do you think would make the difference between a flight initiation distance between a bird in the wild and a bird in captivity? Keep guessing and testing new ways to put your flight initiation knowledge to use!