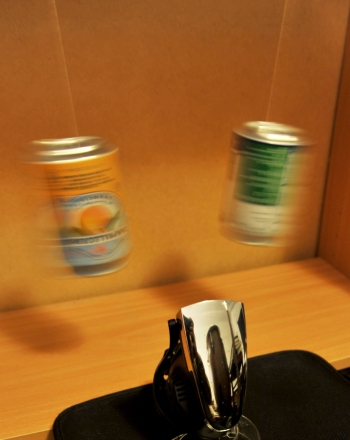 How does moving air change pressure?

When you pointed your hairdryer at a can directly, the can moved due to the invisible push of the wind. When a force like the wind pushes on a specific area, it's called pressure. It’s as if you moved the can with the pressure of your hand.

But why did the cans move together when you blew the air between them? Doesn’t that cause pressure as well?

This is due to Bernoulli’s principle. This principle of physics says that as the speed of the air increases, its pressure decreases. Even when air is just sitting around, it still has pressure. That’s called static pressure, and it’s due to the weight of the air pressing down. Even though it’s not moving, air still puts pressure on the sides of the cans.

When air is moving, it has velocity pressure. Bernoulli’s principle says that the pressure of a fluid when it’s moving is lower than when it’s static, or resting. When the air is no longer still, the pressure on its edges decreases. When the pressure around the cans decreases, they move into the center.

How does this work? Let’s try the experiment with something you can see. Place your three books on end, and press in very gently on the outside of the two outer books. This is like the static pressure exerted on your cans. The book in the middle is the pressure of the static air in the middle of the cans.

What happens when the “pressure” in the middle of your books decreases? If you take out the book in the middle but leave the other two in the same place, then press gently on the two books, the books will move inward. Imagine that the air between the cans is like that middle book. When you blow it quickly out of the middle, the pressure in the center of the cans decreases and the cans move inward.

Place a ping-pong ball on top of a hair dryer that’s balanced with the air vent pointing directly up. Turn the hair dryer on at low or no heat. The ball will rise into the air and stay there as long as the dryer is turned on. You can’t see the column of air, but it is there. This experiment shows off the invisible pressure that air creates.

You can also experiment with other aspects of fluid dynamics. Bernoulli’s principle is often applied to the movement of water. If you have the same amount of water in a small tube or a large one, does the water flow at the same velocity through each one? Turn on a garden hose and let it run, and then place your finger over half the hole. When is the water faster—in the beginning or when you make the hole in the hose smaller? When the same amount of water has to move through a smaller space, it needs to go faster.