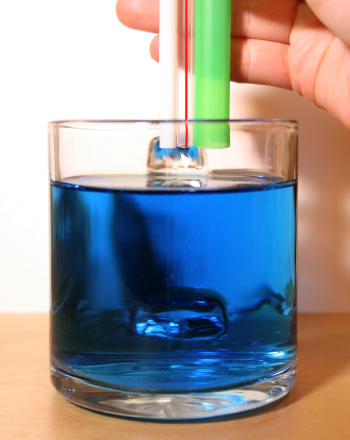 It's a trick, it's magic -- no! It's capillary action, the amazing, gravity-defying scientific phenomenon that causes liquids to flow up. How does it work? Why does it work? Wonder no more because with this simple and fun experiment, you'll see capillary action with your own eyes. You, kid scientist extraordinaire, will test the capillarity of several different straws, determing which kind of straw has the strongest capillary action.

The water travels highest in the narrow straw. Some colored water should have made it up the regular straw, but barely any of the liquid should have traveled up in the biggest straw.

Capillary action depends on dissimilar, or different, substances interacting with each other, one a liquid and the other a solid. In other words, it could never happen between two puddles of water or two straws. When the water molecules hit the straw, the two different substances adhere, or stick together. You can think of it in terms of attraction -- the water molecules are attracted to the inner plastic of the straw.

The results of this experiment can be explained by what you now know about adhering, along with a new concept: cohesion. Cohesion explains the way molecules of a single substance stick together. Water has very strong cohesion. The smallest straw obviously had the smallest opening, allowing for more water cohesion. Imagine dipping your hands into a pool of water. When you lift your hands, some of the water is still pooled in your palm -- as long as your fingers are pressed tightly together. This represents the small straw. Now what would happen if you separated your fingers a bit? All the water would spill out. Even though water is highly cohesive, it can't stick together in a big straw. That's why hardly any water adhered to the inner plastic.

Now you know that the size of the tube is important for capillary action, but what about the liquid tested? Try this same experiment using corn oil, liquid soap and milk. Do you think you'll get the same results? Keep guessing different ways to test capillary action -- and don't forget to make a hypothesis with each new test. That's how scientists investigate the world, and now that's the way you can too!