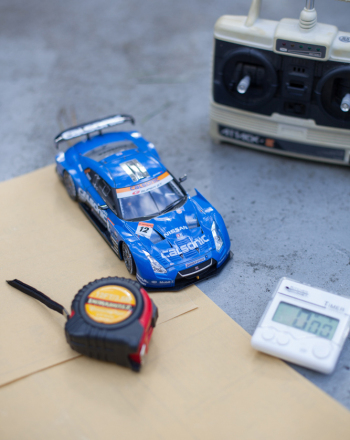 Start your toy engines -- this is going to be a fast and friction-filled race! Have you ever wondered what kind of surfaces make race cars go faster or slower? Grab your remote control to find out as your car zips over different surfaces. The key to this experiment is car friction, or resistance created, between the car's wheels and the road.

How does friction affect the speed of a toy car?

The car will move the fastest on the smooth tile, and much slower on the sandpaper and gravel surfaces.

A car's speed is often determined by the friction between its wheels and the road. When you drove your toy car over the smooth tile, the wheels were met with little resistance. Try sweeping your finger against the tile --is it met with any resistance, anything that somehow stops it from moving forward? Now try sweeping your finger against the gravel. See the difference?

As the car's wheels hit the rough gravel and sandpaper surfaces, they're met with this same sort of friction. You could probably have guessed by now that real race car drivers would rather drive on a smooth surface than a gravel or sandpaper one.

What other ways can you experiment with car friction? You can set up a "friction obstacle course" and see which one of your friends can drive the car the fastest over all the tricky surfaces. Try using bumpy surfaces or even dirt from your backyard. Guessing and testing is a big part of being a scientist -- especially for those studying the science of going fast!