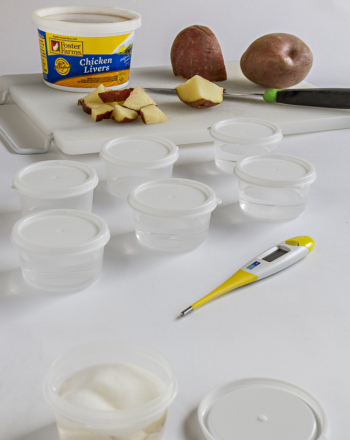 Student tests the effects of temperature change on the reactivity of the catalase enzyme.

Enzymes are proteins that act as biological catalysts. They help chemical reactions proceed more easily in the bodies of organisms. Hydrogen peroxide is produced naturally in organisms, but is very harmful. Catalase and other enzymes help break hydrogen peroxide into water and oxygen gas. The bubbling that you may see if you pour hydrogen peroxide on a cut is the oxygen gas produced from catalase activity. Enzymes, including catalase, have very specific structures that help them bind with their substrate and complete the chemical reaction. Changes in temperature and other environmental conditions can alter the structure of a protein. If an enzyme changes its structure, it may no longer work. In this experiment, the student will work to determine the temperature at which catalase denatures and is no longer active.  Raw potatoes and liver will act as the tissue samples. Catalase activity will be estimated based on the amount of oxygen bubbles produced.