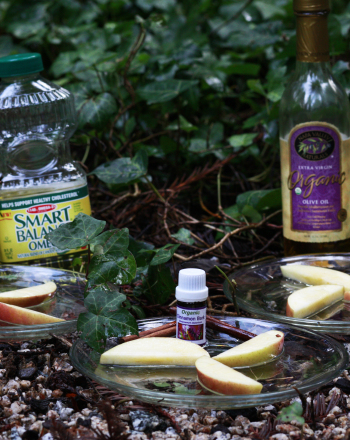 The fun of the great outdoors is too often accompanied by the sting of an annoying mosquito. You've probably tried to keep the bugs away with stinky repellent, but there has to be a better option, right?

Well, there certainly is a more delicious option! What if cinnamon bug repellent could keep bugs off? In this project, you'll experiment to see if a bit of cinnamon oil can successfully block those pesky mosquitoes.

The cinnamon oil apple as the least amount of mosquitoes on it.

Cinnamon oil has chemicals that kill mosquito eggs. Mosquitoes aren't stupid -- they can smell cinnamon (just like we can), and they know to stay away. Vegetable and olive oil do not have the same kind of special chemicals that cinnamon oil has. That's why their apples still attracted the pesky insects.

So now you know cinnamon oil works to repel mosquitoes from apples, but does it work on people? Try comparing cinnamon bug repellent with real bug repellant to see which one can keep your friends and family members more bug-free. Guessing new ways to experiment and then testing those experiments are what scientists do every day -- why not join in on the fun?

Hidden Bug
Worksheet
Hidden Bug
Let your 1st grader color by numbers to find the hidden bug!
1st grade
Worksheet
Cinnamon Dough Leaves
Activity
Cinnamon Dough Leaves
Enjoy some autumn fun, and develop measurement skills with this sweet-smelling fall art project.
1st grade
Arts & crafts
Activity
Litter Bug
Activity
Litter Bug
This Earth Day, create an adorable litter bug while learning about the importance of recycling.
1st grade
Arts & crafts
Activity
Create a Clay Garden Relief Sculpture
Activity
Create a Clay Garden Relief Sculpture
Take the art making outside: have your first grader make a clay relief sculpture of the natural world. This is a great activity for summer.
1st grade
Arts & crafts
Activity
Net Craft: Make a Bug Net!
Activity
Net Craft: Make a Bug Net!
Let your young adventurer go bug hunting in the great outdoors with their very own bug net!
kindergarten
Science
Activity
Bug Mobile
Activity
Bug Mobile
Help your child bend simple pipe cleaners into bug shapes as diverse as the creepy crawlies that inspired them.
1st grade
Arts & crafts
Activity
Wild West Bug
Worksheet
Wild West Bug
Doug the Bug has many jobs, but today he is a cowboy! Help your child color this cowboy critter and the Wild West scene.
1st grade
Worksheet
Book Gus The Bug
Story
Book Gus The Bug
Look no further than this cute story featuring Gus, a bug that will hug anything and everything -- even the sun.
1st grade
Reading & Writing
Story
Sweet Addition
Lesson plan
Sweet Addition
In this sweet lesson, students will explore concepts of addition, including how to begin with a number and count on to find a sum.
1st grade
Math
Lesson plan
Critter Crossword: Bugs
Worksheet
Critter Crossword: Bugs
Test his bug knowledge with a fun crossword puzzle.
1st grade
Science
Worksheet
Bugs On a Rug
Lesson plan
Bugs On a Rug
In this bug-themed lesson, students will look for words that are similar and fit into the -ug word family! By the end of the lesson they will create their own bugs for their uniquely designed rugs!
1st grade
Reading & Writing
Lesson plan
Bug Coloring Page
Worksheet
Bug Coloring Page
...Here's a bug coloring page with insects galore! Kids will have a blast bringing these detailed creatures to life with color....
kindergarten
Worksheet
We enable strictly necessary cookies to give you the best possible experience on Education.com.Cookie policy