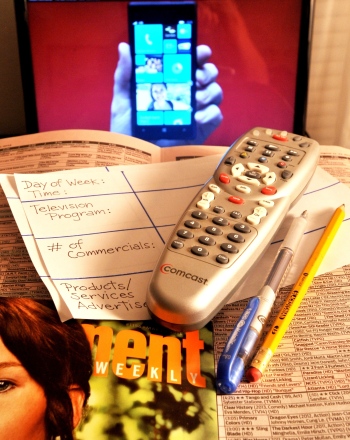 You’re watching your favorite show. Something exciting is about to happen…and…the network goes to commercial. So you tune out for a few minutes while the advertisements flash by. But did you know that companies strategically plan when they’re going to run these commercials on television, on which channel, and during which program? Commercials are expensive, and companies want to target a specific audience—the audience that’s most likely to be interested in buying their products. Let's watch some TV and do a psychology experiment at the same time!

What can the day of the week, time of day and television program during which certain commercials run tell us about the kind of audience companies are trying to target?

There is a strong correlation between the day of the week, time of day, the television program, and what advertisements are shown. The commercial content matches the potential interests of the audience that’s tuning in for the program.

Companies work hard to advertise their products to the right audience. They don’t want to waste money to advertise to viewers who have a very low likelihood of having any interest in what they want to sell.

Did you find that children’s toys were being advertised during the Sunday football game? Probably not. Were more make-up and hair-care commercials run during the evening series drama? Marketing researchers profile the viewing audience of a program and schedule commercials that will appeal to that audience. Advertising psychology is such a part of our lives that it has its own field of study.

See what other connections you can make.  When you turn a critical eye towards these commercials, you will learn a lot about how the media targets its consumers.

After you have identified what products are being sold during these various time slots, you can look at how the commercials are selling the products and think about how companies are trying to attract consumers.

For instance, let’s imagine that we’re watching an evening drama about two attractive detectives in a big city. The network goes to a commercial showing a sleek sports car. A man parks the car, and a beautiful woman in a dress walks up to him and smiles. The logo for the car brand appears. Think about the typical audience that would be watching the drama (children or adults? male or female? etc.), and then apply this to what you see in the commercial. Is the commercial just selling a reliable car, or is there a deeper message? Could it be that the commercial is making promises about a lifestyle that having that car would bring? The more you look, the easier it will be to notice these connections.