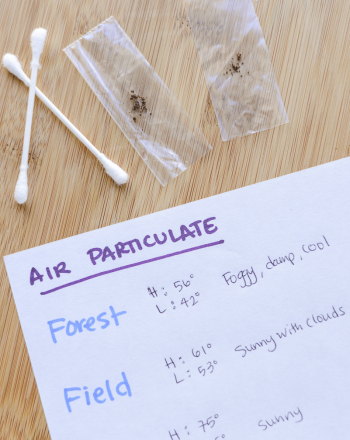 The purpose of my project was to find out whether a rural area or an urban area produces more particulate air pollution. The project also tried to identify which type of habitat within these areas (forest, field, and road) produced more particulate air pollution. To determine this I put microscope slides that were coated with a thin layer of Vaseline out in each of these areas and habitats for 24-hour periods. The particulate matter that settled on the slides stuck to the Vaseline and I was able to count the number of particles under a dissecting microscope.

Is There More Air Particulate Matter in an Urban or Rural Area?

Air pollution is known to be a health hazard. I was interested in doing an experiment to find out some of the patterns of air pollution.

I used a measure of particulate air pollution to answer some of these questions.

The chief forms of chemical pollutants in air pollution are carbon dioxide (CO2), carbon monoxide (CO), volatile-organic compounds (VOC), nitrogen oxide (NOX), and sulfur oxide (SOX). These chemicals can mix together to form other chemical compounds that are also pollutants. These pollutants can have major effects on humans. Such as, a headache, itchy-red eyes, dizziness, tiredness, trouble breathing, colds, the flu, lung problems, even an increased death rate.

Another form of air pollution comes from particulate matter. It is called Particulate Air Pollution. This type of air pollution refers to microscopic, air-born particles, that are suspended in the atmosphere. Particulate matter is 10 microns or less in size. This is the same as one half of the width of an average human hair. Most sources of particulate air pollution come from organic sources. But most organic materials are not harmful. Some of the sources of particulate pollution in the atmosphere are from tobacco smoke, wood smoke, burning of coal, logging, earth moving (construction, road building), and diesel-burning vehicles. Even lawn mowers produce small particles when grass and leaves are chopped up and blown out from the mower. Particulate Air Pollution is a human health hazard because it can travel into your lungs and cause a variety of respiratory problems. Children and senior citizens are affected the most. Particulate matter can be cause an increase in emergency room visits, hospitalization, days off of school and work, heart and lung problems, and an increase death rate.

In addition to human health problems, both chemical and particulate air pollution are prime factors involved with the warming of the earth by the greenhouse effect and the depletion of the earth’s protective ozone layer. There are ways we can tell how bad the air pollution is around us.

The way we do this is with the "Air Quality Index"

I also hypothesize that within each area, the three different community types will have different quantities of particulate pollution. The road will have more than the fields, which will have more than the forests (roads > fields > forests). I believe this because there is more activity that produces particulate pollution near a road. In the fields there is air circulation, which will bring in particles but it is not near the sources of pollution. The forest will have the best air quality because the air is still and the tree’s leaves block particles.

I think that there are several reasons why my experiment produced these results. First, the samples were taken during the period of mid October to mid November. This was the finishing of the corn harvest and during the soybean harvest. Harvesting crops with a combine produces lots of dust and chopped up plants that are blown in the air. I think these particles were what landed on my slides. The urban areas are far enough away from the harvesting that the particles were not blown there. If I had done this test during the summer when there was no harvesting or when farmers are not working their fields, I think I would have different results. I also think that the particles that are produced in urban areas may be too small to be seen with a dissecting microscope. Particles of soot from car and truck exhaust are very small as compared to dust, soil particles, and plant parts that are blown in the air from harvesting.

One other hypothesis I had was that there would be a difference in the particulate air pollution in different types of habitats. My hypothesis was that there would be more particles in near the road and the least amount would be in the woods. I thought the field sites would be somewhere in between. The data for the rural areas (Fig. 3) show that the most particles were collected from the forest site and the least from the road site. This is completely opposite my hypothesis. I this is because the forest slows wind movement and allows particles to settle better than along the road or in a field.

Unlike the rural area, the urban area did agree with my hypothesis that the road would have the most particulate pollution (Fig. 4) when compared to other habitats. But the urban field did show the lowest amount of particles.

In conclusion, my project was to find out, "Is there more air particulate matter in an urban or a rural area". For my project I chose three sites in an urban area and three sites in rural area. Then I placed slides smeared with a thin layer of Vaseline in each of these sites to capture particulate air pollution. I repeated the experiment three times and averaged the results. Based on my date there was more air particulate matter in the rural area as compared to the urban area. This was because the time of the year I sampled was during the corn and soybean harvest and that produced a lot of material. I do not think that this level of particulate matter is constant throughout the year but does occur when farmers are active in their fields. Also, the soot particles produced by automobiles and trucks in the urban area may have been too small to see and count.

The data that I recorded was opposite my hypothesis in one case but not another. I thought there would be more particulate pollution along the road as compared to the field or the forest. In the rural area my hypothesis was wrong. But in the urban area it was correct. I think that forests slow the movement of air. In the rural areas where there was crop harvesting, the particulate matter settled out. But in the urban area where there was no plant particles to settle out in the forest, the road had the greatest amount of particulate air pollution.