How to Create a Visual Doppler 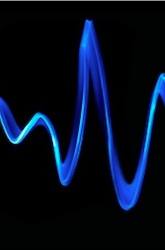 Create a visual model of what happens to sound waves as a car passes by.

Have you ever noticed that the sound a car makes is different when it’s coming toward you than when it’s going away from you? Close your eyes and picture it and try to hear the sound in your head—or better yet, go outside where you can (safely!) see and hear cars going by and listen. This project creates a visual model of what’s happening to the sound waves to make them sound different when the car’s approaching than when it’s leaving.