Ability of Curry and Cinnamon to Inhibit Bacterial Growth 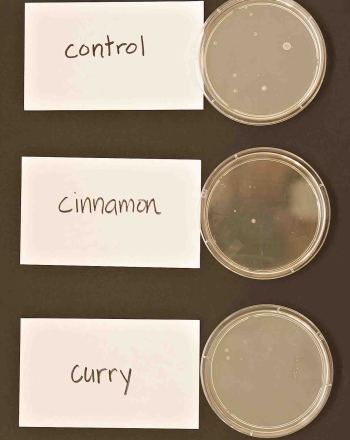 The goal of this experiment is to evaluate the often outlandish claims regarding health benefits associated with spices. Students will learn to culture bacteria and determine first-hand if the claims about the anti-bacterial properties of curry and cinnamon are true.

A quick Google search reveals that many people wholeheartedly believe that curry and cinnamon are potent agents in the fight against infectious disease. However, closer examination reveals that almost none of these claims are rooted in experimental studies. In his 2010 paper appearing in Critical Reviews in Food Science and Nutrition, Gruenwald reviewed some of these claims and concludes that additional work needs to be done. This is your chance to contribute to this field. By inoculating Petri dishes with bacteria and exposing them to concentrated oil of curry and cinnamon, you can determine whether some of these claims are true. Unlike other science fair experiments that require boiling the spices, centrifuging them and using the supernatant, this experiment calls for using oil-based essences of the spice. By not limiting the experiment to water-soluble extracts, it is hoped that this will provide a truer picture of any possible anti-bacterial properties.

Cinnamon and Health: Critical Reviews in Food Science and Nutrition