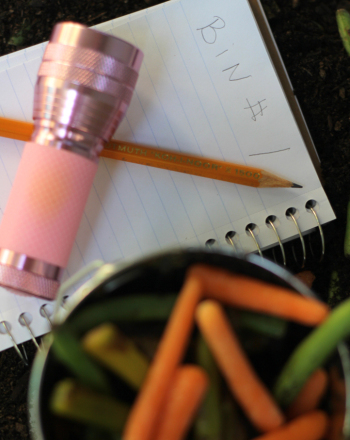 What is the best way to make DIY compost? Can you help your compost turn into soil more quickly?

This experiment works best if you have a compost bin or pile already working in your garden. If you don’t, it’s best to get or build one at least a month before you try the experiment and start to use it so that there are already a lot of worms munching on your compost in the bin.

1.    Collect some delicious compost for your worms. You’ll want two compost buckets that are similar collections of fruit and vegetable scraps.

2.    Place one bucket of compost in one bin. Place the other bucket into the other bin.

3.    You’ll be adding air to one bin and you’ll be ignoring the other. Create a hypothesis, your best guess as to what’s going to happen. Do you think that the bin that has extra air will compost more quickly, or will the two bins be about the same?

4.    Every few days, come out and visit one bin with the aerator. Place it into the first bin and turn it around for five minutes in different locations. Continue this for three weeks.

5.    At the end of the three weeks, inspect the bins. Using your flashlight, look into each bin. Draw what you see. Which bin has the most visible chunks of fruits and vegetables?

6.    If you can remove the top of the bin and access the soil, take your shovel and remove the top six inches of compost from the bin. Take a look at it and count the number of visible chunks you see in the bin. Is the compost still intact? Has it turned into soil? Note any differences between the compost in the two bins.

7.    Do you think that aerating the bins changed its composting rate? Why or why not?

Why does rotting food need air? Rotting—or decomposition—might seem like something that happens best in dark, damp places with very little oxygen. However, air is a necessary ingredient for aerobic decomposition to happen.

Different sorts of decomposers need different conditions to be at their best. Aerobic decomposers like to have air in order to work. For these creatures, turning the compost pile or adding air with an aerator helps them speed up and work well.

There’s another type of decomposition called anaerobic decomposition. This produces the smelly rotting smell that you get when you leave fruit and vegetable scraps in a sealed container for a long time. They will rot, but without air, they’ll do it a little more slowly.

If you don’t turn your compost pile and add air to it, then you make conditions just a little bit harder for those aerobic decomposers, and you slow down your composting. Your fruit and vegetable scraps will decompose, but it will take a little bit longer—and the end result may be a whole lot smellier!