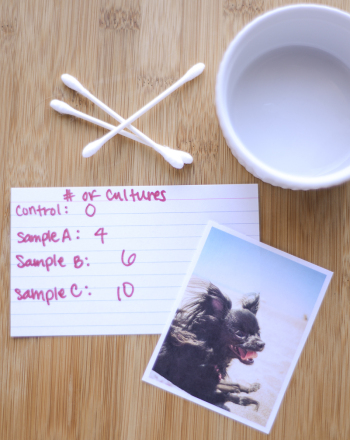 There are many stories about injured hunters or pioneers who recovered from their injuries because wild animals licked their wounds.  Such stories are not unique to the American West, but are common to many cultures.  For example, the French have a saying “Langue de chien, langue de médecin,” which means “A dog’s tongue is a doctor’s tongue.”

Even in our own modern society, the first thing we do when we get a paper cut is to put our injured fingers into the mouth.  Is there any truth to these folktales?  If an anti-bacterial effect is not observed, are there other benefits of wound-licking that could encourage healing?

Are there substances in saliva that kill bacteria?

Safety: Adult supervision may be needed when handling germ cultures.

The saliva of animals contains many agents that kill germs and help heal wounds. A few of these agents include:

Other possible agents in saliva that aid the healing process include nerve growth factors (not found in humans, but present in mice), epidermal growth factor, hyaluronan, and others.

Given all these factors, it is not surprising that saliva can exert a healing effect.  Students should be able to observe that fewer cultures grow out in both of the dishes inoculated with dog saliva. If students don’t obtain the expected result, help them think through an explanation.  Did the dog eat just before the drool was obtained?

Consider other factors such as the mechanical effect of licking.  While there is not an effective way of stimulating this in a Petri dish, licking may clean an injured area and remove germs.

However, there are some possible negative effects of animal saliva as well. Sometimes excessive licking can irritate wounds.  Saliva can also bring new germs to the injured area, particularly if the animal is sick.  As shown by Control #2 in the experiment, dog saliva also has germs of its own.