Create Your Own Earth Model 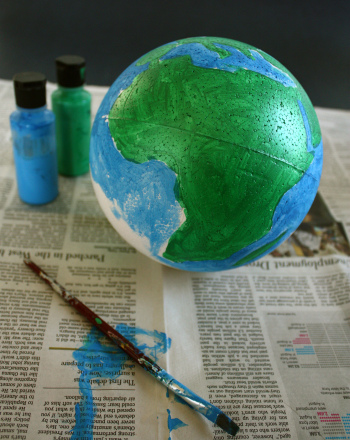 Long ago, many people believed the world was flat. Explorers who loved geography—studying the earth—eventually proved it was round. As people learned more and more about what the world looked like, they shared this knowledge with everyone by making globes.

Creating an earth model is a fun, hands-on way to learn all about our planet. In this project, you'll build a model of the world, complete with all seven continents and four major oceans.

To understand where major land masses and bodies of water are located on earth by building a model.

Your child will be able to see more clearly which oceans border which continents. They'll notice how far one continent is away from another, and where the north and south poles are in relation to the land masses.

Many children learn best by participating in hands-on activities. Making a model of the earth is a great project for helping your kid begin to understand and develop an appreciation of geography. Don't stop at using a Styrofoam ball to create a model earth. Try creating a clay earth, paper mache earth, or even an old volleyball earth! Recycled materials make for excellent science fair materials.

Once your child learns all of the major oceans and continents, delve deeper into geography by having him paint the names of the countries on the model earth, as well as the names of some of the larger bodies of water. Or, keep the science going by building out the rest of the solar system; it's never too early to start space exploration!