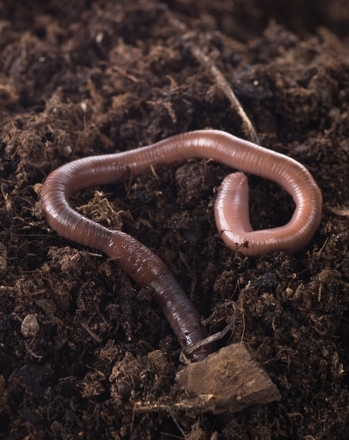 When was the last time you saw an earthworm? Chances are, you don't see these wiggly creatures very often. Worms like to bury themselves in the dirt, where it's dark and wet. Do they like the dirt because it gives them food? Because it's wet, or dark? In this project, we'll be learning about the relationship between earthworms and light.

Do earthworms like bright light, colored lights, or do they prefer darkness?

The earthworms will move away from the bright light and remain in the dark half of the clothing box throughout the experiment. However, when you switch to the red light, you may notice some of the worms in each half of the box. The earthworms don't seem to be affected by the red light the same way they were by the 60 watt light bulb.

Earthworms don't have eyes like we do. Instead, they can sense light through their skin. These natural light sensors let the earthworms know when they are getting too close to a bright light, such as the sun.

Earthworms try to stay out of sunlight because the heat from the sun dries out their skin. If an earthworm's skin becomes too dry, it wouldn't be able to breath, and it would die. The red light's more like a cloudy day to the earthworms. It isn't as bright as the white light, and therefore doesn't scare the earthworm like the regular bulb.

Continue this earthworms and light experiment by using different colored light bulbs. Do the earthworms like one color better than another? You can try yellow, blue, green, and even fluorescent light bulbs. Also, try testing a regular light bulb that isn't so bright. For example, you could use a string of holiday lights instead of the 60 watt light bulb. Does the intensity, or strength, of the light make a difference to the worm? Guessing what will happen and testing your hypothesis is a big part of being a scientist.