Obesity is epidemic. Consequently, incidents of heart disease, diabetes, and cancer have skyrocketed, decreasing lifespan. The increase in obesity and related diseases is largely due to increased consumption of sugar-like substances. Wild-type and GAPDH mutant Caenorhabditis elegans (C. elegans) were used as model organisms to determine the effect of sucrose and glucose on humans’ lifespan. A diet supplemented with glucose and sucrose was hypothesized to significantly reduce the lifespan of both wild-type and GAPDH mutant C. elegans due to disruption in normal carbohydrate metabolism. C. elegans were monitored daily to determine lifespan. Both wild-type and GAPDH mutant C. elegans had significant (to the 0.01 confidence level) reductions in lifespan when grown in the presence of sucrose or glucose. When grown in the presence of glucose or sucrose, GAPDH mutants and wild-type C. elegans had comparable life spans, suggesting that sugar consumption inhibits GAPDH function, which can lead to adverse development and metabolism. Thus, sugar consumption decreases lifespan and consumption of sugar-like substances must be decreased to maintain or increase human longevity.

Difficulty of the Problem

C. elegans were obtained from local university, other supplies $100+ (including dissecting microscope)

Aseptic technique was used throughout to prevent contamination with E. coli, which was used as a food source.

Excessive sugar consumption has become a major issue throughout the world and is contributing to the current obesity epidemic and other diseases. By investigating the effect of sugar-like substances on life span, the current obesity epidemic and its implications, including life span reduction, can be better understood. Therefore, this investigation used wild-type and glyceraldehyde-3-phosphate dehydrogenase (GAPDH) mutant Caenorhabditis elegans (C. elegans) as model organisms to determine the effect of sucrose and glucose on lifespan.

Caenorhabditis elegans (C. elegans) have been used to investigate various diseases and conditions relevant to humans. Although much smaller in size and simpler than humans, C. elegans are an excellent model organism because they are eukaryotic, which provides many similarities between C. elegans and more complex organisms. Additionally, C. elegans have a multistep developmental process because they are multicellular which allows adult organisms to be identified. The ease of maintenance and relatively short natural lifespan of C. elegans make them an ideal model organism (Revyakin, 2002). These conditions allow studies to be conducted using a large quantity of C. elegans to investigate aging.

In addition to their ease of maintenance and relatively short lifespan, C. elegans’ entire genome has been mapped. In total, C. elegans have a relatively small genome with a total of 9.7 x 107 base pairs. This smaller genome allows scientists to easily manipulate its genes. Approximately 35% of C. elegans’ genes have a human homolog, a DNA or protein sequence that is very similar to something found in humans and shows common evolutionary ancestry. One gene that has a human homolog is the gene that codes for glyceraldehyde-3-phosphate dehydrogenase (GAPDH), a protein involved in a variety of biochemical processes including glycolysis, membrane fusion, cytoskeleton formation, phosphotransfer activity, and pathways that connect the endoplasmic reticulum to the Golgi apparatus. The exact mechanisms of most of these functions are still largely unknown. One function of GAPDH that is extremely controversial is its role in regulating oxidative stress and redirecting cells’ carbohydrate flux from glycolysis to the pentose phosphate pathway and the effect of this oxidative stress on the lifespan of C. elegans. Grant (2008) as well as Ralser, Wamelink, Kowald, Gerisch, & Heeren (2007) suggested that GAPDH plays a vital role in regulating the oxidative stress and redirecting the cells’ carbohydrate metabolism pathway to the pentose phosphate pathway and without this regulation, lifespan would decrease. Schulz, Zarse, Voigt, Urban, & Birringe (2007), have stated that increased oxidative stress, such as that associated with glucose and caloric restriction, can actually extend the lifespan of C. elegans by inducing mitochondrial respiration. However, this extension can only occur when normal glucose metabolism is impaired. Additionally, it has not been broadly shown that caloric restriction increases oxidative stress as Qui, Brown, Hirschey, Verdin, & Chen (2010) showed that caloric restriction reduces oxidative stress. The role of GAPDH in aging and regulating oxidative stress is still uncertain and additional information that helps better explain GAPDH’s diverse roles could be utilized to create new treatments for existing conditions caused by increased sugar consumption and GAPDH malfunction.

A study by Wentzel, Ejdesjo, & Eriksson (2003) showed that rat embryos grown in diabetic rats or in high glucose environments had a 40-60% reduction in GAPDH activity, resulting from an excess of reactive oxygen species. Reduction in GAPDH activity resulted in a high incident of embryo abnormality. Thus, the presence of glucose can inhibit GAPDH function in cells without mutations affecting GAPDH. This inhibition occurs because of the excess reactive oxygen species that remain in the cell as a result of GAPDH inhibition. Additionally, diabetes can inhibit GAPDH activity.

Humans consume mass quantities of sugar and sugar-like substances. Increased sugar consumption has been associated with detrimental health conditions such as obesity, diabetes, and higher rates of disease. However, the effect of a high sugar diet on lifespan is uncertain. Lee, Murphy, & Kenyon (2009) showed that C. elegans grown in the presence of glucose have a shorter lifespan than counterparts grown on regular medium. The effects of other sugar-like substances, such as sucrose have not yet been investigated. Investigating the effect of sugar-like substances on the lifespan of C. elegans provides preliminary data that can be used to conduct future studies to investigate the specific biochemical processes related to lifespan regulation and GAPDH function.

In order to complete background research, I had to research C. elegans, GAPDH and its role in various essential biochemical processes, human sugar consumption, and oxidative stress. 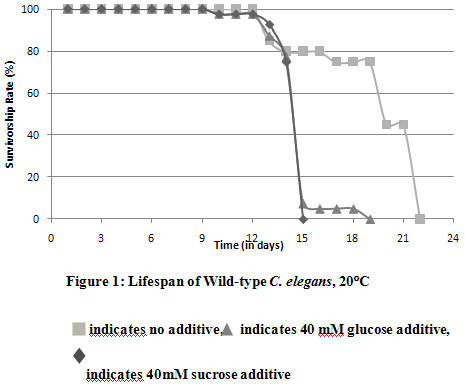 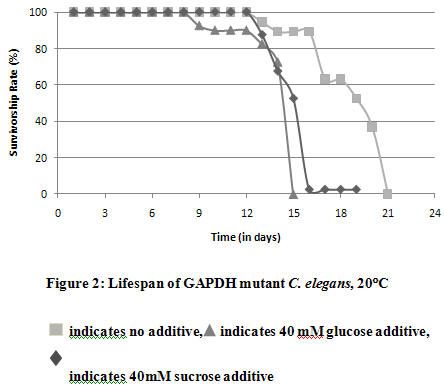 The resulting reduction in life spans was evaluated using the Mann-Whitney U test. Adding sucrose or glucose to the C. elegans’ medium had a statistically significant impact on reducing lifespan to at least the 99% level, meaning that there is less than a 1% chance that the decrease in lifespan happened by chance. Therefore, the null hypothesis was rejected and the alternative hypothesis was accepted.

While growth in glucose or sucrose decreased lifespan, GAPDH mutants did not have a significantly shorter lifespan than wild-type C. elegans when grown with glucose or sucrose. This suggests glucose and sucrose can possibly inhibit GAPDH function in normally functioning cells, as suggested by Wentzel, Ejdesjo, & Eriksson (2003). GAPDH plays vital roles in regulating oxidative stress, redirecting cells’ carbohydrate flux from glycolysis to alternative pathways, preventing neurodegenetive diseases, and regulating cytoskeleton formation and membrane fusion in embryo development (Chuang, Hough, & Senatorov, 2004). Thus, the inhibition of GAPDH, as possibly occurs when glucose or sucrose is consumed, can have adverse effects on cells’ function and can decrease an organism’s lifespan.

In summary, sucrose and glucose significantly reduced the lifespan of wild-type and GAPDH mutant C. elegans, possibly by inhibiting GAPDH and increasing oxidative stress. Understanding the effects of consuming a diet high in sugar-like substances will help combat the current obesity epidemic and increase human longevity.

The next step will be quantifying the possible GAPDH inhibition resulting from added sugar in the C. elegans’ diet. This could be done using either real-time polymerase chain reaction (PCR) to use gene expression to quantify the GAPDH inhibition or using zymography, which would utilize GAPDH’s substrate to quantify this possible inhibition. While this experiment indicated that glucose and sucrose cause a decrease in C. elegans’ lifespan, the data were solely quantitative and focused on the length of life. Because other factors besides length of life, such as quality of life and strength of bodily functions, are important when studying longevity, future

Revyakin, A. (n.d.). C. elegans as a model system. Retrieved from http://avery.rutgers.edu/WSSP/StudentScholars/project/introuction/worms.html.