The Effect of Video Games On the Body 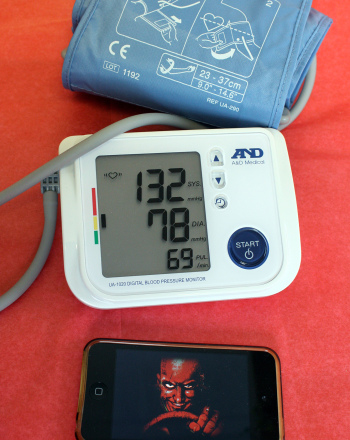 In video games, you’re in a virtual world where enemies lurk around every corner. But how do these games impact your body in real life? The excitement of a computer or video game can be intense. Does your body know the difference between real life enemies and those on the screen? Find out in this video game science fair project!

When you get excited by video games, your heart rate, breathing rate, and blood pressure increase. Your perception of pain decreases, so you’re less sensitive to being poked. Reaction time should also improve.

Your body works in many amazing and quiet ways. Right now, you are breathing, and probably digesting food. Your heart is beating, and you don’t even have to think about it. Your body’s systems help maintain a state of homeostasis, where all internal processes are stable and constant.

The sympathetic nervous system is one of your body’s regulatory mechanisms. One of its jobs is to deal with stress. The nervous system is programmed with a fight-or-flight response (also called the acute stress response) to increase your chances of survival if you find yourself in danger. This response is triggered instinctively in reaction to a perceived threat to survival rather than activated consciously or by choice, and adapts your body’s systems to prepare you to either fight that danger or to evade it by running away. So when your mind is focused on watching a scary movie or playing a video game with intense action, even though you may not actually be in real danger, your adrenal medulla gland still springs into action because of your stressed state. It releases hormones and a rush of adrenaline that could help you fight or get away by increasing blood pressure, heart rate, and breathing rate, turning fat into available energy, suspending digestion, and dilating pupils.

All of these factors work together to increase your strength and speed. Did your subjects’ reaction times improve? Dilated pupils help you see more clearly, and muscle tension and increased blood flow readies your muscles for action and amplifies your agility. Were your subjects’ hands sweaty after playing for a while? During an adrenaline response, your body increases perspiration to prevent overheating due to the higher rate that you’re expending energy. Your body even increases how fast your blood coagulates so that if you’re injured, you’ll experience less blood loss. Decreased or no perception of pain, called analgesia, is also an effect of these life-preserving hormones.

All animals are equipped with a survival response. The flame scallop shoots water out of its shell to flee in the opposite direction. Blue-tailed skinks detach their brightly-colored tails to distract predators while they scurry away. The stingray thrusts out its poisonous barb as a defense. Other animals excrete venom or go rigid to appear dead.

Although in our modern age, unlike prehistoric humans, we do not rely on the fight-or-flight response for our daily survival, it still functions in the times when we do encounter danger, or when we subconsciously perceive a threat. There are many recent recorded instances of adrenaline response provide superhuman strength—people lifting cars, wrestling bears, leaping inconceivable distances for their or others’ survival, completely unaware of injuries they had sustained.

Take a look at your test subjects. How did the stress response in males differ from females? Were your friends who regularly play these kinds of action video games more or less affected by the video game? Did age factor in to your test subjects’ reactions? The more people you include in your experiment, the more insightful your data and conclusions will be.