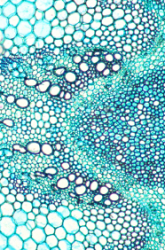 The goal of this project is to reveal that membranes can be semi-permeable—allow for the inward and outward flow of materials. Eggs offer students a tangible example of membranes. They also help students understand the interactions of chemicals such as the calcium carbonate of the shell and vinegar.

Membranes are enclosures that protect the cell within. Semi-permeable membranes allow substances like nutrients to pass through and waste to pass out. Once the vinegar dissolves the calcium carbonate of the eggshell, the thin membrane around the egg white allows the vinegar to pass through into the interior. The egg pulls the vinegar in through osmosis, enlarging and becoming rubbery.

When the rubbery egg is submerged in the second jar, the corn syrup pulls the moisture through the membrane, carrying small molecules with it and leaving behind the larger ones. The rubbery egg shrivels with the loss of mass. The combination of reactions demonstrates the semi-permeable characteristic of the egg membrane.

This experiment can be visually chronicled through photographs accompanied by logbook excerpts as captions. The logbook can follow a simple design, and the entries should be descriptive and detailed.