Emotional Resonance in Color and Black and White Photographs 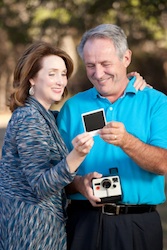 This project explores whether images in color and images in black and white have different emotional resonances.

Do two copies of the same photograph, one in color and one in black and white, evoke different emotions or different intensities of emotion?

References: The Emotional Significance of Color in Television Presentations

Color Patterns: Not Always Black and White
Lesson plan
Color Patterns: Not Always Black and White
Zebras aren't always black and white! Your students will have fun with patterns as they make and describe their own color pattern on a zebra.
Preschool
Math
Lesson plan
Painting and Photography: Which Produces the Greater Emotional Response?
Science project
Painting and Photography: Which Produces the Greater Emotional Response?
This project analyzes people's emotional responses to images in painting vs similar images in photographs.
High school
Science
Science project
The Color Black
Worksheet
The Color Black
Learn about the color black with a fun project, where your child can create her own color book!
Preschool
Reading & Writing
Worksheet
The White House
Worksheet
The White House
Color in this cool scene at the White House, and learn a few White House facts too!
2nd grade
Social studies
Worksheet
Black and White Pumpkin
Activity
Black and White Pumpkin
Halloween's the perfect time for a fun monochromatic art activity -- and a pumpkin's the perfect subject!
5th grade
Arts & crafts
Activity
Color the Great White
Worksheet
Color the Great White
Lucky for us, great white sharks prefer to eat fish rather than people. Color him in -- maybe you two can be friends.
Kindergarten
Worksheet
Writing Colors: Black
Worksheet
Writing Colors: Black
Break out the black crayons! On this prekindergarten writing and coloring worksheet, kids see black objects, trace and write "black," and color with black.
Preschool
Reading & Writing
Worksheet
Color White Fang
Worksheet
Color White Fang
Start your child's interest in reading early! This coloring page tells the story of the wolf-dog White Fang.
1st grade
Worksheet
Great White Shark
Worksheet
Great White Shark
Let your child color one mean shark, the great white.
1st grade
Worksheet
Hanukkah Black and White Gift Tags
Worksheet
Hanukkah Black and White Gift Tags
Print, cut, and color Hanukkah gift tags with your child this winter.
2nd grade
Worksheet
Inside the White House
Worksheet
Inside the White House
Although the White House is technically white, you can color it any way you like with this patriotic coloring sheet.
1st grade
Social studies
Worksheet
Color the White House
Worksheet
Color the White House
A coloring page of the White House, made for 1st graders learning their world geography or U.S. landmarks.
1st grade
Social studies
Worksheet
We enable strictly necessary cookies to give you the best possible experience on Education.com.Cookie policy