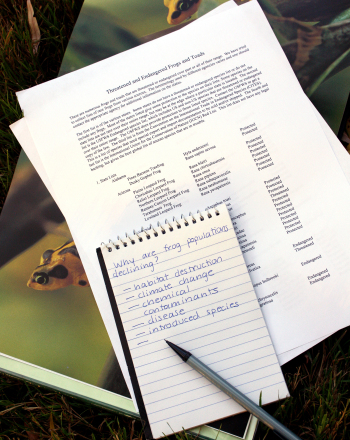 Amphibian populations are in global decline. Because the skin of amphibians like frogs, toads and salamanders is extremely sensitive to environmental changes, there has been much speculation that the die-off is due to the effects of global warming. In spite of the global nature of the die-off, however, there does not seem to be one global factor behind it. As a result, local conditions have also been called out as possible contributing factors. These include the introduction of predators or competitors, acid rain, unfavorable weather patterns, environmental patterns, and infectious diseases.

This project seeks to identify conditions responsible for the at-risk status of threatened or endangered frogs in the region where the student lives. The project is of a theoretical nature, and requires the student to consult experts and published literature to obtain data. The goal is to have the student develop and test a hypothesis that attempts to explain why a particular frog species is in decline and another is not.

Why are some frog species endangered, but others are not?

The following table (taken from http://www.solcomhouse.com/frogs.htm) might serve as a template for data collection in this experiment.