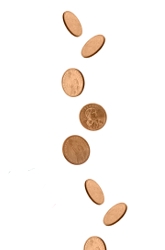 Is the force of gravity affected by a horizontal force?

If you drop a ball, the force of gravity makes it hit the ground. If you throw a ball, two forces are working on the ball – gravity, and the horizontal force from your throw. Which ball do you think would hit the ground first? Use this science project to find out.