How to Extract Caffeine from Gunpowder Green Tea 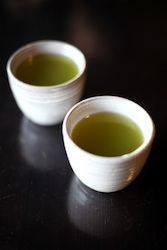 In this science fair project caffeine will be extracted from gunpowder green tea using dichloromethane and anhydrous sodium sulphate. The extracted caffeine will be validated by analysis with tannic acid. This investigation will illustrate the isolation of a naturally occurring product from a plant.