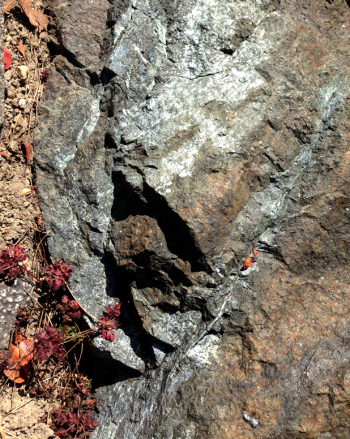 During mechanical weathering, no new substances are produced. The rock gets smaller, but it stays the same kind of rock. For example, water sometimes gets into the tiny cracks in boulders. If that water freezes, it expands, opening the crack even more and eventually splitting the rock into pieces. In a stream, the moving water often knocks rocks against other rocks and sand. Over time, the rocks become smoother and smaller. This process is called abrasion. If you’ve ever rubbed a piece of wood with sand paper, you’ve seen abrasion in action.

Examples of mechanical weathering are easy to find in your own neighborhood. Look for cracks in the sidewalk caused by heating and cooling. Underlying tree roots can make whole slabs of sidewalk buckle. Old gravestones are often hard to read because weathering has worn away the letters.

Another concept related to weathering is erosion. Erosion is the movement of weathered materials to new places. Water, wind, gravity, and glaciers (rivers of moving ice) all cause erosion. Have you visited or seen picture of the Grand Canyon is Arizona? Over millions of years, water, wind, heat and cold weathered the rock, which was ultimately carried away by the Colorado River.

Finding evidence of weathering is fun, but it’s even more fun to cause weathering yourself!

How can we model mechanical weathering?

As the beans seeds sprout, they crack the plaster, just as tree roots can eventually crack a sidewalk.

When making the plaster, you did not add all the water at once because you can make a more uniform mixture if you add it slowly. If you added the beans to plaster when it was still soupy, they may have gotten pushed or sunk to the bottom.

In your investigation, you got to see mechanical weathering in action. The growing plant root and stem pushed open bigger and bigger cracks. Water was able to move in, enlarging the cracks even further. The warming and cooling of the plaster caused it to expand and contract, further weakening the overall plaster “rock”. There was likely some chemical weathering in action, too. The growing bean seeds released substances that chemically broke the plaster down.

Once you are done with your experiment, you might move your sprouting bean plants to some soil. To do this, just crack the plaster a bit more. As you dig a hole to plant your beans in the soft earth, thank the process of weathering for having started the process of turning giant boulders in fertile soil, millions of years ago!