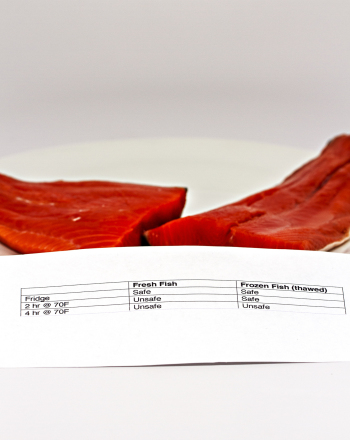 This project will examine the incubation times needed to produce harmful levels of E.Coli and Salmonella in fish

Escherichia coli (E.coli) is a bacterium commonly found in the lower intestines. In healthy individuals it is known as normal flora and prevent other pathogens such as Salmonella from colonizing. E.Coli has many strains but the serotype O157:H7 causes gastrointestinal infections, commonly referred to as food poisoning. Salmonella is also a food-borne pathogen similar to E.coli but it is zoonotic, so the bacteria can spread from animals to humans. E.coli and Salmonella can be transmitted through unsanitary food preparation. Recent food recalls have been due to E.coli contamination so it is important to practice good food safety when handling, cooking, and storing foods. Temperature requirements for storage and cooking can prevent the spread of bacteria but if not followed can have serious health effects including death. In this experiment we will test the time it takes to produce unhealthy levels of E.coli and salmonella.

1)     Once you purchase the fresh and frozen fish place both into the refrigerator. The frozen fish will need approximately 24 hours to completely thaw.

2)     Once thawed, sample the fresh and frozen fish and test for E.coli and Salmonella.

3)     Set the fish samples onto two separate plates and cover with plastic wrap. Based on your research determine the time it takes to produce harmful levels of bacteria and allow the samples to sit at room temperature for that amount of time.

4)     Sample both the fresh and frozen fish and test for E.Coli and Salmonella.

a)     Is there a change? Did leaving the fish out at room temperature

5)     If there is a change in the levels of harmful bacteria can this be reversed by cooking? Cook the fish samples in the oven using two separate baking pans. Based on your research determine the optimal cooking temperature and time. Using a meat thermometer check to make sure the center of the fish is fully cooked.

7)     Organize your data into a chart showing the changes in healthy and hazardous levels of bacterial contamination during various stages of food preparation.