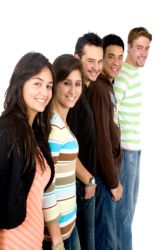 This experiment compares the abilities of men and women to understand subtle communication through body language.

Is one gender better at interpreting body language? Though men and women tend to utilize similar body language, the way they interpret it can be very different. This experiment will evaluate whether one gender is superior to the other with regard to deciphering the subtle signals communicated through body language.

First, recruit a few participants to set up several brief scenarios which you will record. Example scenarios could include:

Scenario 1: While talking, one person eagerly leans forward while the other leans back in a relaxed position.

Scenario 2: One person (on the left) casually strokes his or her leg while having a conversation with another (on the right).

Scenario 3: Two people are talking. One person (on the left) sits leaning forward, with arms crossed over his or her legs.

Scenario 4: Two people are talking. One person (on the left) is leaning forward and talking with his or her hands in a pleading manner.

Scenario 5: Two people shake hands. During the handshake, one person (on the left) enthusiastically pats the other on the shoulder.

Think of additional scenarios to construct based on your own research about body language!

Next, create a multiple-choice test to give your test subjects that analyzes their interpretations of your video scenarios. The following are example questions about the scenarios listed above:

Scenario 1: What is the person leaning forward saying with their body?

b. I am inferior. (Correct answer)

c. I am superior.

Scenario 2: What message is the person on the left conveying with his/her body?

a. I find you attractive. (Correct answer)

b. I find you boring.

c. I find you unattractive.

Scenario 3: What is the person on the left conveying with his/her body language?

a. I am comfortable with you. (Correct answer)

Scenario 4: What is the person on the left conveying with his/her body language?

a. You are boring.

b. I want you to listen to me. (Correct answer)

c. You make me nervous.

Scenario 5: What is the person on the left conveying with his/her body language?

a. I’m happy to see you. (Correct answer)

Then gather many male and female test subjects, show them your video scenarios, and ask them to take the test.

Analyze the tests. Does one gender score better than the other?