The Genetics of Eye Color 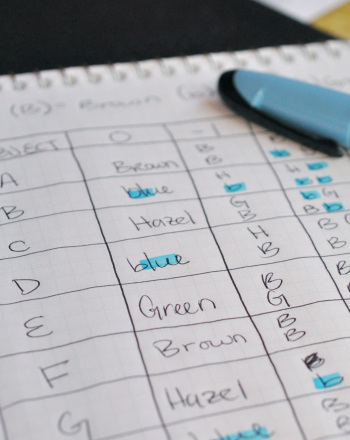 To discover a person’s eye-color genotype.

The purpose of this project is to discover eye-color genotypes that could be present in a given population. This study will take into account dominant and recessive traits as well as the evolving understanding of the genetics of eye color.

Mendel first identified simple dominant and recessive traits in his famous experiments on pea plants. In human beings, a baby receives one set of genes from its father and another set from its mother. The combination of all of these genes, and the often complicated interactions between them, give the baby many of its physical characteristics, including its eye color. It was formerly thought that just two genes influenced eye color. However, it was recently discovered that the first gene is actually two distinct genes! Although eye color is much more complicated than we initially thought, for the purposes of this project we'll keep things simple and focus on more common cases and the interaction of dominant and recessive traits.

The following example shows the possible genetic outcomes for a father with Bb and a mother with Bb.

Because only one gene must be dominant to show the dominant trait, the father has brown eyes.

Because only on gene must be dominant to show the dominant trait, the mother has brown eyes.

As each parent will only pass down one of their two alleles to their offspring, we can determine what combinations are possible using a chart such as this:

Eye Color Genetics
Science project
Eye Color Genetics
This science fair project idea examines eye color genetics and the role it plays in eye color inheritance.
Science project
Eye Color Chart
Worksheet
Eye Color Chart
Help your preschooler conduct a fun experiment involving lots of interaction and learning about something that helps make people unique: eye color.
kindergarten
Science
Worksheet
Parts of an Eye
Worksheet
Parts of an Eye
Our eyes are one of the most important parts of our body -- they allow us to see! Color in the diagram as you learn what parts make up an eye.
Science
Worksheet
Testing the Relationship Between Eye Color and Sight
Science project
Testing the Relationship Between Eye Color and Sight
This experiment evaluates whether a person's eye color affects their ability to identify colors in low light.
Science project
Eye Diagram
Worksheet
Eye Diagram
Take a peek inside the human eye with this eye-catching worksheet! See a simple eye diagram and learn vocabulary words that will help your kid understand sight.
2nd grade
Science
Worksheet
Explore Genetics by Finding Family Traits!
Activity
Explore Genetics by Finding Family Traits!
For a fun family activity to introduce your child to genetics, have your child go on a search for dominant and recessive family genes!
5th grade
Math
Activity
Eye Doctor
Worksheet
Eye Doctor
Help your child learn more about what an eye doctor does and how they help you see in this community helpers worksheet.
preschool
Social studies
Worksheet
Human Anatomy: Eye
Worksheet
Human Anatomy: Eye
Just like the rest of our body, our eyes are a complicated system! Learn about how the human eye works with this anatomy sheet.
5th grade
Science
Worksheet
Awesome Anatomy: Eye See
Worksheet
Awesome Anatomy: Eye See
This Awesome Anatomy coloring page is all about the human eye, and makes a handy study tool as well!
5th grade
Science
Worksheet
Pirate Eye Patch
Activity
Pirate Eye Patch
Your child will get in touch with his inner pirate when he makes his own pirate eye patch with this fun activity.
2nd grade
Arts & crafts
Activity
Reading Picture Graphs: Eye Colors
Worksheet
Reading Picture Graphs: Eye Colors
Teach kindergarteners how to read picture graphs with this worksheet all about the eye colors of the students in Ms. Swan's class.
kindergarten
Worksheet
Don't Get Soap in Your Eye!
Science project
Don't Get Soap in Your Eye!
Look for correlation between pH values of commercial soaps and detergents and manufacturer claims about eye irritation hazards.
High school
Science project
We enable strictly necessary cookies to give you the best possible experience on Education.com.Cookie policy