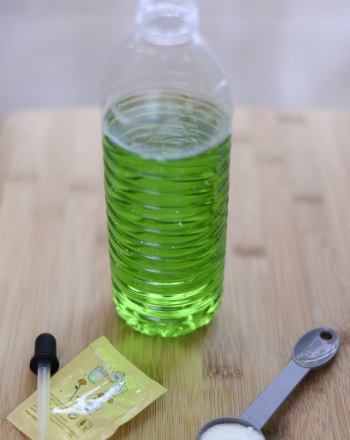 This project measures the growth rate of algae supplied with supplemental carbon dioxide.

The goal is to have the student conduct a controlled experiment to test a hypothesis about conditions affecting the growth of algae.

Algae are organisms commonly found in aquatic environments. There are two types: macroalgae and microalgae. The large multicellular macroalgae are often found in ponds and in the ocean. They tend to be measurable in inches, although giant kelp in the ocean can grow to more than 100 feet in length. Microalgae are tiny unicellular algae that grow as suspensions in water; they are measurable in micrometers. Common sources of microalgae are bogs, marshes, and swamps.

All algae require sunlight, water, nutrients, and carbon dioxide for growth. Through the process of photosynthesis, algae convert the carbon dioxide into glucose (a sugar). The glucose is then broken down into fatty acids, which under normal conditions, are used to produce membranes for new algal cells. If, however, the algae are starved of nutrients, the fatty acids produce fat molecules (oil). Because carbon dioxide is the only source of carbon for algae, having an adequate supply is essential if they are to be used for commercial purposes.