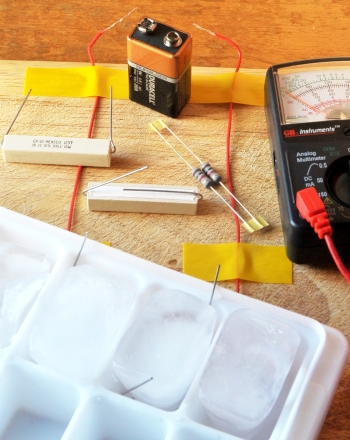 For some reason, your laptop charger gets super hot when you plug it in.

It had recently stopped working, and so you left it with a friend who claimed to know how to fix it. He said that all he’d need to do would be to swap out a broken resistor with a replacement—but he also mentioned that he replaced the charger’s resistor with a resistor with a lower value of resistance. His reasoning was that it would make your laptop charge faster. For this same reason, he also cranked up the voltage that travels through the charger, and now you’re sitting home with a laptop charger that feels like it could burn a hole through your couch.

Let’s do an experiment to get to the bottom of how your friend’s executive decisions probably contributed to your dangerously hot laptop charger!

Extra: Attach the ammeter to your circuit and look at how much current flows when the resistors are in the ice vs. when they aren’t. What do you observe?

Your 10-ohm resistor melted the ice! However, the AA battery didn’t melt it nearly as quickly as the 9-Volt battery did.

You’re witnessing a phenomenon called joule heating. Joule heating is what happens when you run current through anything that has a resistance (which is really everything, except superconductors!). It’s what makes electric toasters work, and it’s the reason computers need fans to keep them cool. Joule heating is proportional to the voltage squared divided by the resistance. What this means is that higher voltages increase the amount of heat by a lot, and lower resistances will increase the heat as well. When circuit elements get hot, their resistance goes up, which also reduces the amount of current that can pass through them. Your friend was right, in a sense, that lower resistance would let your laptop charge faster—but he didn’t account for how much it would heat up.

Joule heating happens when the electrons hit ions (charged atoms) in the material as they travel along the circuit. The 1.5 Volt AA battery you attached to your circuit would move the electrons at over 1,500,000 meters per second, if they weren’t running into anything. That’s fast enough to go around the entire world in twenty five seconds! However, electrons do bump into things and get scattered. This is basically what accounts for resistance.

When the electrons bump into the ions, they cause the ions to vibrate. This is the source of heat you see in your circuit—in fact, temperature is just a number that quantifies this molecular vibration (heat). When your friend put in a lower resistor and increased the voltage of your charger they made the resistor give off much more heat than the charger was built for. The reason a lower resistance increases the Joule Heating is because there’s much more current (electrons) flowing through the material, and thus many more collisions between electrons and ions in the resistor.

Superconductors are special materials that have no resistance. Therefore, they produce almost no joule heating! These materials are essential for technologies like particle accelerators, magnetic levitation trains, and magnetic resonance imaging. They would be amazingly useful for consumer electronics if it weren’t for the fact that they need to be super cold to work–some need to be under -130 degrees Celsius!