What Causes the Seasons to Change?

What causes the seasons to change? The first answer many people give when asked why the Earth gets cold in the winter and warm in the summer is because the Earth’s distance from the sun can vary during its orbit. Astronomers have carefully measured the distance between the Earth and Sun and have discovered that the Earth is closest to the Sun in January, and farthest away in July.

Eventually, humans figured out that the varying seasons were caused by the earth’s tilt in combination with its orbit around the sun. You might have learned that the Earth spins like a top. It does not spin straight up and down, though—it spins at a 23 ½ degree tilt. The imaginary line that the earth is spinning around on is called its axis. When the top of the Earth is tilted towards the sun, it is summer in the northern hemisphere. Since the bottom half of the Earth (the southern hemisphere) is tilted away from the sun, it’s winter there. 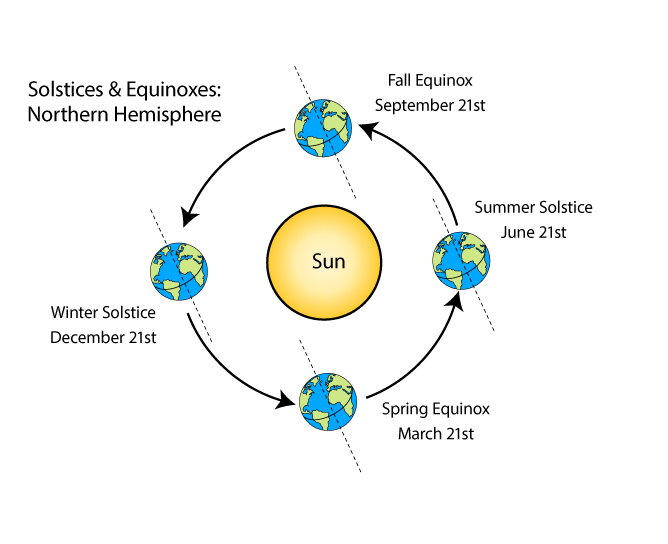 The tilt correctly predicts the seasons, but how does the tilt cause warmer or colder temperatures? You can see for yourself!

How does the tilt of the Earth cause the seasons?

In addition to demonstrating how seasons are caused, this experiment shows why some parts of the earth are warmer than others year-round. Remember that the flashlight always emits the same amount of light. When the light shines on the equator, the circle is bright and small, meaning lots of sunlight is concentrated in a small area. This is why the parts of the Earth near the equator are hot and have tropical vegetation. As you moved the light along the curve of the Earth towards the middle of either hemisphere, the same amount of light was spread out over a larger area. These parts of Earth’s surface get only a medium amount of light energy, explaining why these parts of the Earth are not as warm as parts located near the equator. Your light tracings near the poles were the biggest, meaning the sun’s light was spread very thin. That is why the North and South Poles are so much colder than the equator.

The Earth’s tilt creates seasonal differences in light intensity. Since the northern part of the Earth was tilted towards the sun, the light circles were smaller and brighter. This causes these parts of the Earth to be warmer during the summer. By the time your light reached the North Pole, the light circle was bigger (meaning the light is more spread out), but since the pole was tilted toward the light, it can still experience daylight in the summer. When you shined the light toward the South Pole, it probably didn’t reach the South Pole at all because this pole is tilted away from the sun during the winter. This is why the poles experience almost total darkness in the winter.