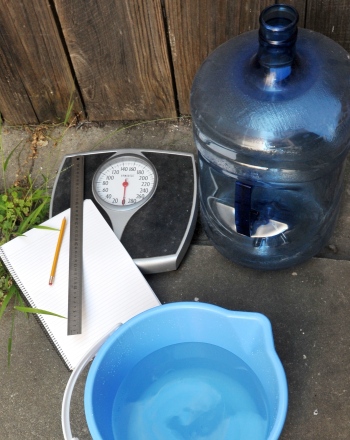 Have you ever wondered why you don’t fall out of an upside down loop on a roller coaster, or why a satellite can stay in orbit around the earth? Centripetal force is a force that causes an object to move along a curved path by pulling the object towards the center of the path. The velocity (speed and direction) of the object is constantly changing because the direction of the object is constantly changing, even though the speed remains the same unless acted upon by an outside force. The direction of such an object at any given point is always perpendicular to the centripetal force.

For a circle, the centripetal force is given by the following equation:

Download Project
Subject
SciencePhysical Science
Thank you for your input.

Where F is the force in Newtons, m is the mass of an object in kilograms, and ac is the centripetal acceleration which can also be described by v2/r, the square of the velocity divided by the radius (the distance from the center of the circle).

For objects traveling in a vertical orientation, meaning at some point they are upside down, the centripetal force must be at least equal to the gravitational force, so the object (or person!) does not fall.

The water will spill out of the bucket when the gravitational force of the water exceeds the centripetal force exerted on the water when it is upside down.

Centripetal force exerted on a spinning object like our bucket of water also leads to an equal and opposite centrifugal force, the force that the rotating object exerts on the restraining mass (the hand that is swinging the bucket). These two forces work in opposition, which pushes the water to the bottom of the bucket as it passes overhead. Centrifugal force is a consequence of inertia—the tendency of a moving object to want to continue moving in a straight line. As we fling our bucket of water in an arc over our head, the water wants to continue traveling in a straight line, but the force of our hand constantly redirects the water so it travels in an arc instead! Water’s inertia resists this redirection, causing the force of the water to push against the bottom of the bucket. It’s a great example of Newton’s third law: Our hand pulls on the bucket to change the direction of the water from a straight line to an arc (centripetal force), and the centrifugal force from the water pushes the water to the bottom of the bucket!

Here’s an analogous situation: Imagine you’re riding as a passenger in your dad’s car. He makes a really sharp turn, and as a result, you feel like you’re being thrown against the inside of the car door. What’s really happening is that your body wants to continue moving forward, but the turning car pulls your body in a new direction. Your body’s intertia resists this pull, because like all objects, it wants to continue traveling in a straight line.

Now, let’s take a look at the math.

To solve for velocity of your swinging bucket, you have to calculate the gravitational force that acts on the water:

Where Fg is the gravitation force in Newtons, m is the mass of the water and g is the acceleration due to gravity, which is 9.81m/s on Earth.

The water will spill from the bucket when the gravitational force is slightly greater than the centripetal (or centrifugal) force, so for simplicity they can be set to equal each other, the variables rearranged, and solved. It is important that weight (mass) is measured in kilograms because that the units in the equation must be consistent for the equation to be true.

Physics of Speed Skating
Worksheet
Physics of Speed Skating
This cool physics worksheet helps kids learn how centripetal force and centrifugal force can explain why short track speed skaters don't fall over during turns.
5th grade
Science
Worksheet
Learn About Force
Worksheet
Learn About Force
When we push or pull an object, we exert force on it. Get your child thinking about force by challenging him to describe how each person is exerting force.
2nd grade
Science
Worksheet
Tangential Velocity and Circular Motion Experiment
Science project
Tangential Velocity and Circular Motion Experiment
In this simple circular motion experiment, you'll observe tangential velocity and learn about how acceleration and centripetal force affect an object.
3rd grade
Science project
Force and the Fulcrum
Science project
Force and the Fulcrum
This science fair project idea explores how much force is needed to move a lever at different distances from the fulcrum.
5th grade
Science project
Spin the Bucket: A Centripetal Force Experiment
Activity
Spin the Bucket: A Centripetal Force Experiment
Have your child try this classic experiment that demonstrates circular motion using a bucket and rope. Be careful, you might get soaked!
Middle school
Science
Activity
Buoyant Force of Water
Science project
Buoyant Force of Water
The buoyant force of water explains why some objects float in water. But why do some objects sink? Find out in this physics experiment and learn about density.
6th grade
Science
Science project
Make it Move: Force and Energy in Action
Lesson plan
Make it Move: Force and Energy in Action
In this lesson, students will learn about energy and make connections between force and energy. Through a hands-on approach, students will work in teams to construct and report on their experiments.
3rd grade
Reading & Writing
Lesson plan
The Right-Hand Rule for Magnetic Force
Science project
The Right-Hand Rule for Magnetic Force
Learn about the right-hand rule for magnetic force! Use a cathode ray tube in this physics experiment to see a magnetic field's effect on an electron beam.
Science project
Heroes and Villains Super-Set: Sonar
Worksheet
Heroes and Villains Super-Set: Sonar
Pair Sonar with Radar and youâve got an unstoppable crime-fighting force!
2nd grade
Worksheet
Learn About Force: Friction
Worksheet
Learn About Force: Friction
...Kids will dive into physical science and answer short questions checking for comprehension....
2nd grade
Science
Worksheet
Defying Gravity
Science project
Defying Gravity
This science fair project idea investigates how magnetism can defy the force of gravity.
3rd grade
Science project
Free Falling
Science project
Free Falling
Demonstrate Newton's laws of motion by examining the relationship between mass, force, and acceleration during free-fall.
Science project
We enable strictly necessary cookies to give you the best possible experience on Education.com.Cookie policy