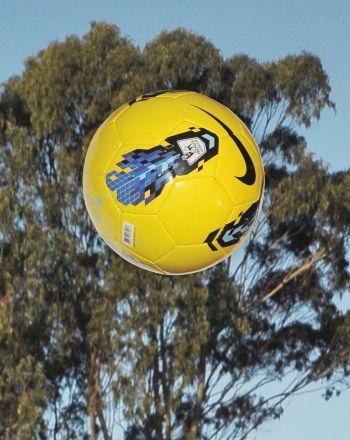 A bullet is fired from a gun held parallel to the ground. At the exact same moment, a second bullet is dropped from the same height as the gun. Which bullet hits the ground first?

The answer to this classic conundrum is not at all intuitive. It depends on a fundamental fact of physics: vertical and horizontal motion are completely independent of one another. While we won’t be firing any guns in this investigation, we will use some everyday objects to demonstrate a basic law of motion that applies to everything from a home run baseball to a rocket launch.

How do the vertical and horizontal motions of a projectile affect one another?

Which hits the ground first: a bullet fired horizontally from a gun or a bullet dropped from the same height as the gun?

You probably noticed that the ball went up and came right back down to the person on the skateboard, despite the fact that she was moving the whole time.

By listening to the coins, you will hear that they hit the floor at exactly the same time, even though one was shot out while the other dropped straight down.

Horizontal and vertical motion are completely independent of one another. If you stand in one spot and toss a ball straight up, it will come back to you. That’s probably not a surprise. But the ball also falls right back into your hands even if you are moving sideways the whole time. The vertical (up and down) motion of the ball knows absolutely nothing about the horizontal (sideways) motion. When you throw the ball up while riding the skateboard, the ball keeps going sideways. Because the ball retains its original horizontal motion after it leaves your hands, it ends up in your hands again as if neither you nor the ball had ever moved sideways in the first place.

The coin demonstration shows you the same thing, only a bit more dramatically. Both coins fall from the same height and begin falling at the same time. However, one is fired horizontally off the table while the other drops straight down. Intuitively, you might think that the launched coin should take longer to hit the ground because it has a greater distance to travel, but that’s not the case: they both hit the ground at the same time.  Remember: the coin’s vertical motion knows nothing about its horizontal motion, and gravity doesn’t care either way.  When figuring out how long it takes for either coin to hit the ground, all that matters is the height from which you’re dropping them.

Now you know enough to answer the original question: which bullet hits the ground first? The answer is they both hit the ground at the same time!