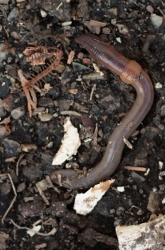 The student will collect and count invertebrates in ecosystems to determine if there is a relationship between the number and variety of insects and spiders.

In every ecosystem, there are food chains that transfer energy from the sun to a producer, then to consumers. These food chains may be woven together to form the food web that more accurately shows the feeding relationships in the ecosystem. Every time that energy is transferred from one organism to another in an ecosystem, some energy is lost to the environment as heat. Because of this, food chains may also be portrayed as trophic energy pyramids, with producers on the bottom with the most energy and number of individuals. As you go up the food chain from primary to secondary and tertiary consumers, the number of organisms and the amount of energy decreases. In this experiment, the student will determine if the invertebrate ecosystem shows this trend by comparing the number of herbivorous insects to the carnivorous insects and spiders.