Rust Chemistry: How Does Rust Form? 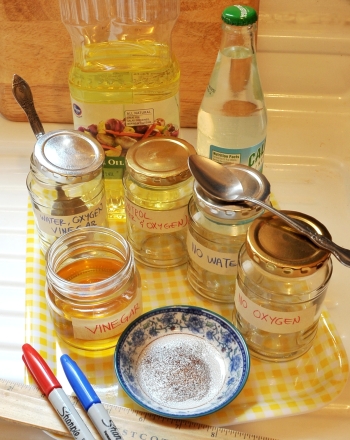 When you hear the term “chemical reaction”, you might think of scientists in white lab coats mixing dark powders to create explosions. Maybe you think of the flurry of bubbles you saw when you mixed baking soda and vinegar in kindergarten. You probably don’t think of your bicycle rusting after you leaving it out in the rain—but rust is indeed the result of a chemical reaction!

Corrosion is the chemical reaction where metals break down slowly because of other elements in their environment.. Rusting, a well known example of corrosion, is the breakdown of the metal iron. The reactants of this chemical reaction are iron, water, and oxygen, and the product is hydrated iron oxide, better known as rust. Rust, unlike iron, is crumbly, orange, and pretty much useless for building things. In this experiment, you’ll discover what kind of conditions help rust form or prevent it from forming at all, and why.

What substances cause iron to rust?

Label your containers as follows:

So how does rust form, exactly? Rust chemistry is fairly straightforward: when rusting occurs, iron atoms lose electrons to the oxygen atoms. To get to the oxygen, however, these electrons need to travel through water!

Rust appeared on the iron filings in Jar 1 because all reactants were present: The iron was in the filings, the oxygen came from the air, and of course, you added the water. Jar 2 had no water because the calcium chloride removed moisture from the air. Because only oxygen and other gasses in our atmosphere were present in the jar, no rust could be created. In Jar 3, the layer of oil prevented the oxygen in the air from meeting up with the water and iron underneath. Remember—without oxygen, we can’t get rust. In Jar 4, the vinegar created a chemical reaction of its own with the iron filings. This made it easier for the oxygen in the air to react with it and create rust.