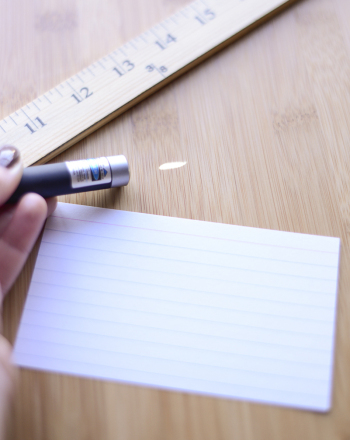 Quantum Mechanics. Something that scientists in movies and prestigious universities investigate, right? Not necessarily! Do this experiment and you’ll be able to see quantum mechanics in action by exploring the wave-particle duality of light.

How can we see quantum interference?

What is happening is that the photons that are passing through the two holes are interfering with each other in much the same way that waves in water do: making patterns of light like the ripples in a pond. Two different things can happen to waves during interference: waves that are in-phase with each other (happening at the same time) add together to become stronger and waves that are out of phase cancel each other out and become weaker. The reason you saw a striped blob of light when the laser passed through two holes is because of constructive interference—spots where the waves added together to become stronger.

This is weird because there is ample evidence that points to light being made up of small particles. It doesn’t make sense for particles to interfere with each other—this would be like baseballs caring about whether they pass through holes that are near each other! The only logical conclusion is that light is both a particle and a wave. The individual photons (light particles) coming from the laser act as waves as they travel through the two holes—that is, they interfere with each other before finally hitting the wall.

Another experiment was designed to test this theory. Scientists created a source of light that only let out one photon at a time. They aimed this at a sensitive detector and left it on for a few days. The detector only saw individual photons strike it: one photon here, another there. But after they stopped the experiment and looked at the data, they saw the same interference that you’re seeing with the laser! Individual photons were able to travel through both holes at once. When the scientists repeated this with electrons, tiny particles that make up parts of atoms, they saw the same thing. From this, they concluded that all matter is simultaneously a particle and a wave, but when it comes to relatively heavy things like electrons, the particle behavior is a lot easier to observe than the wave behavior.

Portable Photon Kit
Science project
Portable Photon Kit
Create a double-slit interference out of cardboard. Produce an interference pattern that demonstrates the wave and particle characteristics of light.
High school
Science project
Watercolor Wave
Lesson plan
Watercolor Wave
Use Hokusai's "The Great Wave off Kanagawa" to inspire a fun watercolor resist painting with your students!
1st grade
Lesson plan
Speed of Light
Worksheet
Speed of Light
Children are introduced to the concept of the speed of light in this illustrated worksheet.
5th grade
Science
Worksheet
Direction of Light
Worksheet
Direction of Light
Light travels so quickly that sometimes we can forget it even travels at all. Learn all about the direction light travels and perform your own experiment!
3rd grade
Science
Worksheet
Light Sources
Worksheet
Light Sources
Without light sources, we wouldn't have any light. Can you imagine a world without any light sources?
3rd grade
Science
Worksheet
Light Bounces
Worksheet
Light Bounces
Did you know that light could bounce? Set up a light obstacle course with a few mirrors and watch light bounce around your room.
3rd grade
Science
Worksheet
Light and Color
Workbook
Light and Color
Did you know that light can bend? Help your curious kids learn the important physical properties of light and explore how light adds colors to our world, with this beautiful series on light and color.
3rd grade
Reading & Writing
Workbook
Light Speed
Worksheet
Light Speed
Almost nothing in this universe can travel faster than light! Have some fun exploring the speed of light with this space science worksheet.
5th grade
Science
Worksheet
Can you Change the Speed of a Reaction by Changing the Particle Size of the Reactants?
Science project
Can you Change the Speed of a Reaction by Changing the Particle Size of the Reactants?
Check out this fun science fair project idea to determine if the size of a particle affect the rate or speed of a chemical reaction.
Middle school
Science project
Light Reflection
Activity
Light Reflection
What happens when light hits a hard surface? Find out by conducting a simple light reflection experiment with your preschooler.
preschool
Science
Activity
Mirrors and Reflection of Light
Science project
Mirrors and Reflection of Light
This science fair project demonstrates the principles of reflection through simple experiments involving mirrors and light.
5th grade
Science project
This Little Light of Mine
Science project
This Little Light of Mine
This science fair project idea sheds some "light" on which color of candles burn the longest.
High school
Science project
We enable strictly necessary cookies to give you the best possible experience on Education.com.Cookie policy