How to Make Lightning 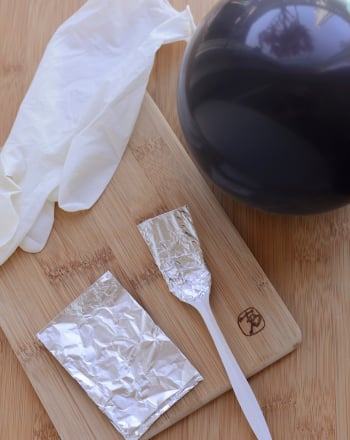 Have you ever wanted to be a mad scientist? Has your lack of control over lightning disheartened you? Never fear; this experiment will let you bend electricity to your will by showing you how to make lightning!

Extra: for even cooler results, conduct this experiment in a room that you can darken as much as possible!

You should have seen and felt a spark when you touched the foil. When you lifted the foil off and touched it again, you should have felt another spark. Your hand doesn’t spark, and most non-metallic objects won’t spark when you touch the charged object either. All metals insulated by your glove that touch both your charged object and your hand will spark.

You’re experimenting with static electricity. The static electricity you see is caused by the movement of electrons. Electrons carry a negative electrical charge, which causes them to be attracted to protons and repelled from other electrons. When you rub an object on your hair, it does one of two things: it either puts electrons onto the balloon, or strips electrons off of the Styrofoam plate. This gives the balloon or plate a net charge, meaning the object has either more electrons or fewer electrons than protons.

Metals are special materials in that their electrons are free to move almost wherever they like, instead of being stuck on the material’s molecules. When a metal object is placed near something with a net charge, all of the electrons in the metal will move to be either as far away from a negative charge as possible or as close to a positive charge as possible. Metals are called conductors. Your plate and your balloon are both insulators—they don’t let their electrons move where they want.

Your hand doesn’t spark because your body provides a path to ground. What that means is that when you bring your hand close to the balloon, all the extra electrons needed come from or go into the ground you’re standing on! Because of the rubber glove you’re wearing, the tin foil spatula has no path to ground, so it cannot equalize its charge. When you touch it, you are providing it with a path to ground for the electrons to move and balance things out. The earth has plenty of electrons to spare, and they move all over the place.

So what makes lightning? Lightning occurs when there’s a big charge difference between the clouds in the sky and the earth. Lightning is just a bigger version of the sparks you saw!