Examining Mass And Density Of Popped And Unpopped Popcorn 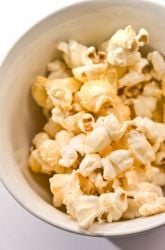 Mass, Volume and Density
Science project
Mass, Volume and Density
Demonstrate the relationship between mass, volume and density. Measure displaced water, and weigh object to calculate mass and density.
Science project
Herb Popcorn!
Activity
Herb Popcorn!
Make flavored popcorn with your kids and explore the tastes of herbs. They'll learn more about their palate as well as how to make perfectly popped popcorn!
3rd grade
Activity
Popcorn Pops
Activity
Popcorn Pops
Popcorn pops get a Valentine's Day twist with pink popcorn and a red candy center. Make popcorn pops as a special treat for Valentine's Day or any day.
4th grade
Activity
Popcorn Pumice: Exploring Different Rock Densities
Science project
Popcorn Pumice: Exploring Different Rock Densities
In this popcorn experiment, students can explore how two things made out of the same material can have very different appearances and densities.
3rd grade
Science project
Popcorn Snowman
Activity
Popcorn Snowman
Not all snowmen are made of ice. This popcorn snowman tastes like the holiday season and also makes a cute decoration on any dining table.
kindergarten
Activity
Density of Coke and Diet Coke
Worksheet
Density of Coke and Diet Coke
Your kid may be surprised to learn that the density of coke and diet coke aren't the same!
4th grade
Science
Worksheet
Where Should You Store Your Popcorn?
Science project
Where Should You Store Your Popcorn?
This project investigates the affect of storage temperature on microwave popcorn.
4th grade
Science project
Coservation of Mass
Science project
Coservation of Mass
Science fair project that demonstrates the principle of conservation of mass by conducting a chemical reaction inside a sealed Ziploc bag.
Science project
Density Demonstration
Activity
Density Demonstration
Show your child that the simplest ingredients (salt and water) can be used to illustrate the concept of density!
4th grade
Science
Activity
Measurement Word Problems: Mass and Volume
Worksheet
Measurement Word Problems: Mass and Volume
Kids measure mass and volume with metric word problems.
3rd grade
Math
Worksheet
Popcorn Bracelets
Activity
Popcorn Bracelets
Popcorn bracelets are a fun, easy activity that will engage children who will eat as they play.
Activity
Density of Salt Water
Worksheet
Density of Salt Water
Budding scientists will learn about the density of salt water and perform an experiment with food coloring, salt water, and fresh water.
4th grade
Science
Worksheet
We enable strictly necessary cookies to give you the best possible experience on Education.com.Cookie policy