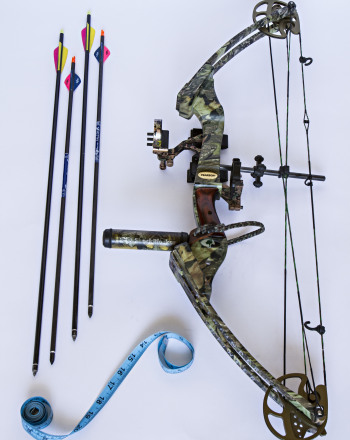 The goals of this experiment involve analyzing different aspects of projectile motions. In a first set of experiments, you evaluate how the mass of an arrow affects the distance an arrow travels. In a second set of experiments, you learn how the angle of firing affects distance. While the math that relates these variables is not introduced until high school and college physics, simply drawing graphs of the results of these experiments illustrates the existence of a relationship between these variables.

In an ideal universe, such as the ones in which most physics experiments take place, mass does not matter in studies of projectile motion because where is no air resistance. However, in real life, mass exerts a large effect. The angle from which an arrow is shot also determines the arc traversed by the arrow and how far it will go. By systematic experimentation, students can take various measures of this phenomenon and graph their results.

If students use a computer-simulated bow and arrow, the only needed equipment is a computer, Internet access and an online computer-simulator, like the one listed in the Bibliography. Students using genuine equipment will require arrows of various weights, a regular bow and arrow, and measuring tapes. They should use a recognized archery range and have distances marked on the ground to determine how far the arrow was shot. While this equipment is available online and in specialty sport shops, students are encouraged not to spend money on this experiment if they do not have the necessary equipment.