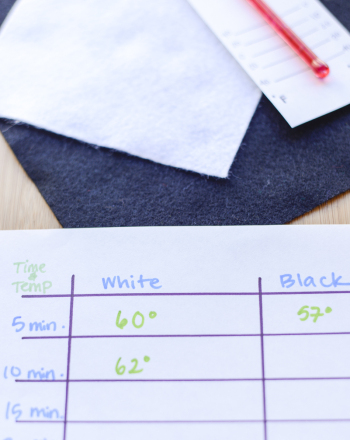 The goal of this experiment is to learn about albedo and consider how this information is applied in the design of cars, sportswear, and other items.

The dictionary tells us that albedo is the proportion of light or solar radiation that is reflected by a surface. Some colors, such as pastels and whites, have a higher albedo because they reflect more light. Other colors, such as black, have a lower albedo because absorb light, instead of reflect it. Since less radiation is absorbed by light colors, they tend not to warm up as much as those that absorb more radiation. The albedo of something that is perfectly black is 1, while the albedo of something that is perfectly white is 0.

The applications of this simple principle are many. Albedo explains why you wear light-colored clothing to play tennis in summer and why dark-colored car seats can be so brutally hot when the car has been sitting in the summer sun. This also explains why air over land and water tends to be different temperatures. Albedo has important meteorological consequences. Air over land (which has a lower albedo) heats up more than air over water (which has a higher albedo), even though they are exposed to the same amount of sunlight. The warmer air rises, causing the cooler air to rush in – which is why it is windy at the show. Albedo may even play a role in accelerating global warming. As more of the icecaps melt, more land is exposed. Since exposed land has a lower albedo than snow-covered land, the ambient temperature is higher, which encourages further melting of the icecaps.

If you use material, the black material should be the same type of fabric as the white material. For example, both should be broadcloth, rayon, etc.

One variation of this experiment involves parking two cars with different colored seats in similar locations, placing thermometers on the car seats and seeing which heats up faster.

A second variation involves obtaining two ice cubes with identical shape and mass and putting them in a custard dishes resting upon the black and white backgrounds.